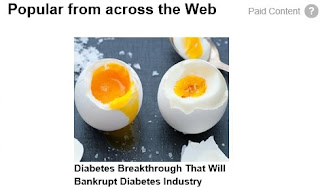 Two execs in the parking lot of Monspfivartzis  walking to work.

"Hey Kevin.  Did you read that article at breakbigpharma?"

"The one on natural Cialis? I tell you I don't need it, Bob!"

"No. And not the one on the link between autism and vaccines, either. There was an article on exercise and control of diabetes," Bob explained.

"Dang! Who leaked that to the press?" asked Kevin, unaware that he personally had done so two weeks ago, mistaking his Facebook prompt for a Cortana search of his own computer.  The keywords he'd posted had allowed the intuitives at breakbigpharma to connect the dots.

On the whole, this was still better for Kevin personally than when he had mistaken his Facebook prompt for a Google search and asked his friends and family about impotency and discrete sources of Cialis.

"If people start exercising, we are going to lose customers for a dozen products," Bob whined.

"But, if they exercise outside..."Kevin mused.

"Yeah! This could be big for our chemtrails program!"
Posted by Surprises Aplenty at 5:55 PM