The art of Seattle. My friend M Heilman spent a fews days in Seattle and it seems she found the best art outside of the museum. Here are two of her images that I have shrunk greatly - follow the link for more and fullsize. 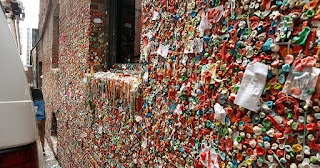 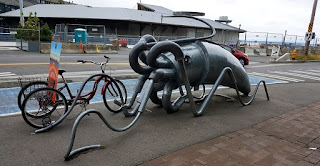 ---
Comics Writer Jason Arron
---
Michael Bond, author of Paddington Bear stories, has passed away. I had some learning difficulties in elementary school and read Paddington with the therapist, Ruth Tinkiss, so many years ago.
---
Is Firefox better than Chrome? Not all that creativity-related but consider it another PSA from Surprises Aplenty!
---
Science and creative writing


Scientists may even beat creative writers at their own game due to a "killer work ethic" and the lack of a so-called publication angst, Irish writer and novelist Aifric Campbell wrote.
"It was the interdisciplinary challenge that intrigued me, but I’ll admit to being (skeptical) about the students’ writing potential. So I was delighted to be proved wrong: their writing is easily as good – and often better – than that of creative writing students I have taught elsewhere, including at the University of East Anglia. And my external assessors – also writers who teach and hold PhDs from UEA – agree," she said in an article posted on UK's The Guardian.

A Distraction-free text editor.My favorite on the Mac is Ommwriter but the PC version has problems. An excerpt from the review:


Overview
Write!1 describes itself as a distraction-free text editor. It enters the market in an interesting way: the Mac offerings here are numerous, varied, and excellent. Offerings on Windows are fewer and further between, and in my experience of much lower quality. Distraction-free text editors outside the world of programming text editors barely exist at all on Linux, as far as I can tell.2 Write! is cross-platform, targeting all three of these. And that, as we’ll see, is the story of this particular app — for good and for ill.
The Good
First, the good: the app seems to perform relatively well. Text entry, even on a fairly large document, is smooth and quick. (I imported the text of this ~7200-word paper to test it and it didn’t stutter a bit.) Especially given the time I’m going to spend on the not-so-good below, I want to take a moment to applaud the developers for getting that right.


4. Remember that the blank page is nothing to be scared of. Remind yourself of this often. Every day, in fact. One day you might even believe it.
5. Write thousands of words of pretentious bilge. Fill a forest-worth of notebooks with future embarrassment. Fail again and again. At some point, fail better.

---
Narrating dreams and other stories. A nearly five minute video that explains the problems and solutions to storytelling.


The reason other people's dreams are boring is because most people are bad at telling stories. This video from The School of Life offers suggestions on how to narrate your dreams (or tell any kind of story, factual or fictional) without boring your audience.
We naively assume that enthusiasm and authenticity can be enough...
This charming though ultimately lonely egocentricity can best be seen in children who are the worst storytellers...

rules for successful storytelling
1 We must understand a story at least five times as well when its to be shared in company.
2 Keeping a story brief takes far more effort than letting it expand.
3 We need to simplify. The downfall of almost all anecdotes is an accumulation of incidental detail untethered to the logic of the story.
4 Factual events: dates, times, actions are always less interesting, though far easier to remember than feelings. Yet it is the feelings that invariably contain the kernel of what will intrique other people.