When I was my son's age, we built rectilinear houses and rectilinear  cars with square blocks and we liked it!  Now, my son wants specialty sets based on marketable themes and with unusually shaped pieces that build preplanned shapes: castles, helicopters, dinosaurs, dune buggies and steam-punk vehicles.
---
This seems life a good place for an addition two weeks later:  The Ethical Adman misses the old Lego sets too.  He shows some 1970's Lego ads, including one of an interesting ambulance, then says,


This was around the time when I started playing with the iconic blocks, almost 40 years ago. Note that the craptacular ambulance built by 5-year-old "Maria" could have just as easily been built by "Mario".

And then it hit me what the real problem is.

Lego stopped being a "blank slate" imagination toy sometime in the '80s. While you can still buy plain blocks if you look hard enough, Lego is now much more about getting kids to act out branded and scripted narratives than asking them to start from scratch.

I haven't decided if this is an improvement.  Maybe the creative aspect has simply moved one step.  Where I built an owl, carefully choosing the right pieces to form a large diamond -shaped body and a  smaller diamond-shaped head with protruding beak, then admired it as it sat on my dresser, the little guy builds castles, populates them with good and bad guys, then spends hours acting out a story with them.  My creative output was in making; His is in using. 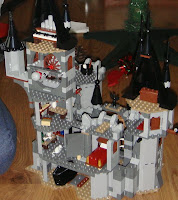 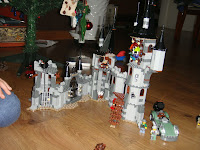 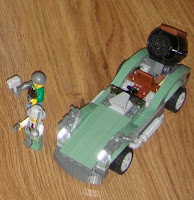 I have two concerns with the specialty shapes in the Monster Fighter themed sets, though.  First, it will be hard or impossible to use some of them in new ways later.  The spooky, gothic castle roof piece looks like it would only be appropriate as a spooky gothic roof piece - maybe the castle part is the variable.  The castle is made from perhaps twenty tall blocks that now have the included atmospheric stickers on them.  It is difficult imagining them as being repurposed as aircraft wings, for example.

All that said, I do love the flourishes and details in the vampire's castle.  There is a library, a cauldron with magical ingredients stewing and a piano in the attic of a high tower.  The little guy has already put the vampire in there to work the keyboard.

A related point is that the castle perfectly fits my conception of a vampire's castle but I am old.  I would be upset with a Twilight-style castle (they don't have castles? That woman is ruining the genre!) but I also don't want my son to be pushed into playing out traditional vampire stories.

My second concern with the Monster Fighter's themed sets is the number of guns.  Now, I played with guns a lot as a child and have turned out mostly fine.  In the set, it is not merely a few characters who have guns, but the cars have guns as exhaust pipes or hood ornaments.  They look bad-ass but not in a way I want to son to experience.  Am I old and cranky?
Posted by Surprises Aplenty at 3:00 PM