Covers of his songs here.
---
Writer's block? One solution.

Slightly larger image at the link.
---
Planning your plot. And keeping track of it all as you go. I love the idea of using wall space like this:A manuscript of Henry Miller's outline of 'Tropic of Capricorn' (Image is shrunk -see full size at the link) 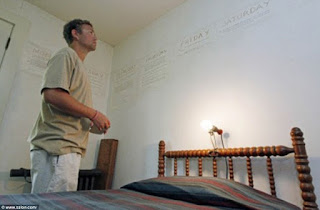 ---
Protect yourself from copyright infringement. one of three suggestions:


One of the oldest tricks for proving that a work belongs to you is to print off your writing and send it to yourself in a sealed envelope. This sounds weird but, legally, it functions the same way as a copyright. All mail is stamped with the date by a government employee. And if an envelope is properly sealed, it implies that its contents haven’t been tampered with. Therefore the contents contained within the envelope are recognized by the government as having been written on or before the stamped date.


These understated, almost unimportant titbits are what make for a good plot twist, but you need to get the balance right. If you give the reader too few clues the twist will seem as though it’s come from nowhere, and your story will feel tacky and thrown together. If you give them too many clues as to the impending twist, it won’t be a twist at all, because of its predictability and lack of surprise. Therefore, a successful plot twist needs to be both something that comes from beyond the audience’s viewpoint, and yet, once the dust has settled, feels somewhat satisfyingly inevitable.

---
What writers really do.


I carried that image around for the next 20-odd years, too scared to try something that seemed so profound, and then finally, in 2012, noticing that I wasn’t getting any younger, not wanting to be the guy whose own gravestone would read “Afraid to Embark on Scary Artistic Project He Desperately Longed to Attempt”, decided to take a run at it, in exploratory fashion, no commitments. My novel, Lincoln in the Bardo, is the result of that attempt, and now I find myself in the familiar writerly fix of trying to talk about that process as if I were in control of it.
We often discuss art this way: the artist had something he “wanted to express”, and then he just, you know … expressed it. We buy into some version of the intentional fallacy: the notion that art is about having a clear-cut intention and then confidently executing same.
The actual process, in my experience, is much more mysterious and more of a pain in the ass to discuss truthfully.


New Lesson
This week students will complete a first draft for writing assignment #4. It’s a story about a boy who meets an alien space ship. The purpose of this assignment is to practice and improve good writing skills like idea, organisation, the first sentence, word choice, and conventions.
In particular, please pay attention to articles and verb tenses.
The exercise has a second purpose. I want students to learn and practice writing complex sentences.
Here is the picture prompt for this exercise.

This is the middle part of the lesson - follow the link for the preview and review and etc.
-
My own ESL students in writing and speaking are generally vague.


It would be so easy for them to tell me the name but they naturally relax to the simplest information. Sometimes I worry about prying. If a student told me in class he went to an 'ero'[tic] movie, I would be pleased with the detail but concerned about TMI. It's a fine line.  Anyway, Rob also tackles weak details, in creative writing rather than personal events.


Focus student attention on pictures 3 and 4. They lack detail. This is where students need to add detail by asking questions. These questions might include: 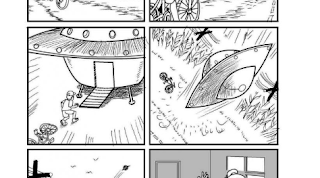 ---
cliches in comics.
Via Bizarro, I learned of Bob Mankoff's discussion of cliches in comics. Further searching led me to this list that John Freeman made. I copied the whole list here, then deleted maybe 80%. If it interests you, you know what to do.  Added after saving and returning later -Wow! When I first placed them here, there were in a tidy list, not jumbled together.

---
Via Kottke comes this video of a master woodworker building a dugout canoe.

The Birth Of A Dugout Canoe by Northmen from Northmen on Vimeo.

Posted by Surprises Aplenty at 5:28 AM