Most authors disapprove of fan-fic - fiction written by fans in the universes created by established authors.  J.K. Rowling probably doesn't want you to make your own Harry Potter stories.


Lev Grossman, author of The Magicians, thinks otherwise.  He approves of fan-fic.


Fan-fiction writers aren’t guys who live in their parents’ basements. They aren’t even all guys. If anything, anecdotal evidence suggests that most fan fiction is written by women. (They’re also not all writers. They draw and paint and make videos and stage musicals. Darren Criss, currently a regular on Glee, made his mark in the fan production A Very Potter Musical, which is findable, and quite watchable, on YouTube.) It’s also an intensely social, communal activity.

The buildings in Bolivia are an eye-full: 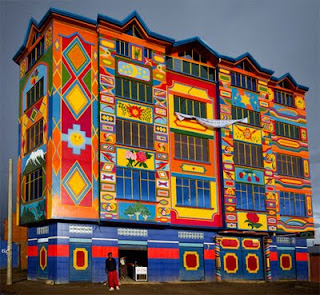 This photo is from Boing-boing, and they found it on MLandivar's flickr page.
Posted by Surprises Aplenty at 9:22 AM