I enjoy Saturday Morning Breakfast Cereal comic and follow the artist on Twitter.  Here is a Tweet that relates to the upcoming book marathon that begins in only a few days (Yeah, I guess it should be NaNoWriMo, but it's INternational, dang it!). 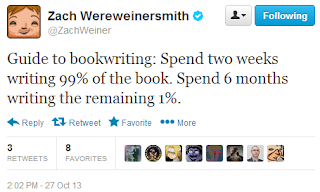 I'm still torn about what to do for InNoWriMo.  I tried it once and have a few thousand words in the story I want to write and have in mind so I will probably keep going on that and perhaps try to end at 55,000 words rather than 50,000.  Or even just the standard 50,000 and simply try to finish the dang thing!  No sense in being too aggressive in my goal setting. 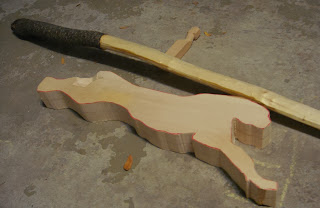 I needed a 'sword' for my Ninja Frog costume.  Alright, since you're twisting my arm, here is the costume:

Anyway, I quickly made a katana style sword.  The biggest challenge was in carving to look sword-like, which was easy, but also to make it relatively harmless.  Ironically, if I had made it sharp and thin it would look more dangerous but be less so.  In fact, after clearing off the bark, the tiniest bit of narrowing of the sides made it look great.  The wood is glossy buckthorn, a invasive species at the Marsh.

Above the sword is the start of a giraffe.  I found the little block of wood and played with it while waiting for a bus and am now continuing the project.  I already know the head and ears will look weird.

Most importantly is my son's Christmas present.  He is fascinated by cheetahs and I am working to carve one for him.  I have only a Swiss Army knife and some super-cheap chisels (or maybe, gouges) and may need to get a new gouge to two to make this one right.  Expect photos of my progress.

Want to learn about film making?  Hitchcock has advice.
Posted by Surprises Aplenty at 10:20 AM