Be careful out there.

Grant Snider looks at errors and perfectionism.  Here are four of twelve panels. 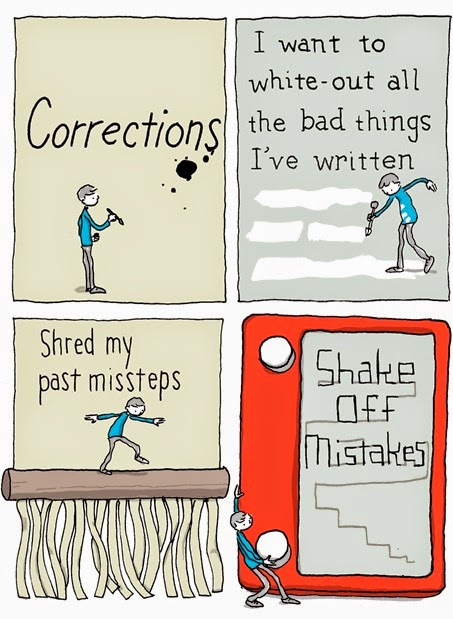 Follow the link to see the rest.
---
Be careful in your writing.  "Write about what you know"  But if you do, the man may come knocking.

A Dorchester County, Maryland, teacher was taken in for an "emergency medical evaluation," suspended from his job, and barred from setting foot on another public school. Authorities searched his school, Mace's Lane Middle School in Cambridge, for weapons. As classes resumed, parents worried that their children were in danger, so police decided to remain on the premises to watch over them.What happened? The teacher, Patrick McLaw, published a fiction novel. Under a pen name. About a made-up school shooting. Set in the year 2902.


"From our perspective, this was more about a health concern about Mr. McLaw than about a security issue," [state attorney] Maciarello said. Authorities grew concerned about McLaw after he sent a "four-page letter" to a school administrator over the summer. According to Maciarello, the letter contained no threats against schools or school personnel, but that it indicated that McLaw was not mentally sound. "Health care professionals were concerned, he was in a relationship that had just come to an end, he was talking about his mother as being overbearing, there was some thought that he could be a threat to himself." Based on the "totality of the circumstances," Maciarello said, McLaw was involuntarily committed for evaluation. Among those circumstances: Authorities said that McLaw had built a model of a school building in his home, and had asked an administrator to move classrooms, to one near the "point of ingress and egress" of the school.
Yes, I too was underwhelmed by that response. I asked Maciarello if the novels McLaw had self-published had been a factor in county decision-making: "The books are a factor," he said. "You cannot consider the total picture without knowing that he had this book, this other writing. This was very concerning to the administrators.

It now seems possible that police officials are somewhat discretely investigating other aspects of the author's past.  I hope they either release their information at some point or that McLaw take the school and local police department for enough money to help him begin anew with another new name (the article conflates nom-de-plume with 'alias').
Posted by Surprises Aplenty at 7:07 PM