Hurry, the New Yorker's archives are freely available for the next few weeks.

Their material is entirely open for the summer.

I will look for articles on more personal topics, of course, but here are a few on creativity.

From 2008, The Running Novelist, by Haruki Murakami.  Because the articles are available only briefly, here is a large excerpt.  As a runner and a wannabe writer, I found the aspects of Murakami's life interesting.


I think this viewpoint applies as well to the job of the novelist. Writers who are blessed with inborn talent can write easily, no matter what they do—or don’t do. Like water from a natural spring, the sentences just well up, and with little or no effort these writers can complete a work. Unfortunately, I don’t fall into that category. I have to pound away at a rock with a chisel and dig out a deep hole before I can locate the source of my creativity. Every time I begin a new novel, I have to dredge out another hole. But, as I’ve sustained this kind of life over many years, I’ve become quite efficient, both technically and physically, at opening those holes in the rock and locating new water veins. As soon as I notice one source drying up, I move on to another. If people who rely on a natural spring of talent suddenly find they’ve exhausted their source, they’re in trouble.
In other words, let’s face it: life is basically unfair. But, even in a situation that’s unfair, I think it’s possible to seek out a kind of fairness.
When I tell people that I run every day, some are quite impressed. “You must have a lot of will power,” they tell me. Of course, it’s nice to be praised like this—a lot better than being disparaged. But I don’t think it’s merely will power that makes one able to do something. The world isn’t that simple. To tell the truth, I don’t even think there’s much correlation between my running every day and whether or not I have will power. I think that I’ve been able to run for more than twenty-five years for one reason: it suits me. Or, at least, I don’t find it all that painful. Human beings naturally continue doing things they like, and they don’t continue doing what they don’t like.

That’s why I’ve never recommended running to others. If someone has an interest in long-distance running, he’ll start running on his own. If he’s not interested in it, no amount of persuasion will make any difference. Marathon running is not a sport for everyone, just as being a novelist isn’t a job for everyone. Nobody ever recommended or even suggested that I be a novelist—in fact, some tried to stop me. I simply had the idea to be one, and that’s what I did. People become runners because they’re meant to.

---
How caffeine can cramp creativity.


According to a recent review of some hundred studies, caffeine has a number of distinct benefits. Chief among them are that it boosts energy and decreases fatigue; enhances physical, cognitive, and motor performance; and aids short-term memory, problem solving, decision making, and concentration.
But all of that comes at a cost. Science is only beginning to unravel the full complexity behind different forms of creative accomplishment; creativity is notoriously difficult to study in a laboratory setting, and the choice of one approach over another limits the way that creativity can be measured. Still, we do know that much of what we associate with creativity—whether writing a sonnet or a mathematical proof—has to do with the ability to link ideas, entities, and concepts in novel ways. This ability depends in part on the very thing that caffeine seeks to prevent: a wandering, unfocussed mind.

Caffeine also inhibits another mental process that’s necessary for creative thinking: sleep. A 2009 study showed that people who experienced REM sleep performed better on two tests of creative thinking than those who simply rested or napped without entering the REM cycle. During REM, their brains were able to integrate unassociated information so that, upon waking up, they were more adept at solving problems they had been primed with earlier.

Read the rest before it is gone
---
Where do Eureka Moments Come From?

Insight, however, has proved less difficult to define and to study. Because it arrives at a specific moment in time, you can isolate it, examine it, and analyze its characteristics. “Insight is only one part of creativity,” Beeman says. “But we can measure it. We have a temporal marker that something just happened in the brain. I’d never say that’s all of creativity, but it’s a central, identifiable component.” When scientists examine insight in the lab, they are looking at what types of attention and thought processes lead to that moment of synthesis: If you are trying to facilitate a breakthrough, are there methods you can use that help? If you feel stuck on a problem, are there tricks to get you through?

...
This work suggests that being caffeinated may facilitate the analytical part of the creative process but impede the insight-finding part, by honing your focus but dulling your ability to think more diffusely.
It suggests, too, that timing is important. If you aren’t focussed when the problem is presented, for instance—that is, if your attention is already diffuse when “pine,” “crab,” and “sauce” first flash across the screen—you may find it harder to reach an insightful solution because you haven’t done enough conscious, analytical processing. You need to take the time to understand all aspects thoroughly before you try to facilitate your mind-wandering or daydreaming. In other words, don’t go for a walk or hop in the shower or take a nap immediately after getting a new problem. First, reach for that cup of coffee to make sure you don’t miss any details.

---
Groupthink: The Brainstorming Myth
Having just finished a university course on creativity and brainstorming, this contrary view is a must-read.

The first empirical test of Osborn’s brainstorming technique was performed at Yale University, in 1958. Forty-eight male undergraduates were divided into twelve groups and given a series of creative puzzles. The groups were instructed to follow Osborn’s guidelines. As a control sample, the scientists gave the same puzzles to forty-eight students working by themselves. The results were a sobering refutation of Osborn. The solo students came up with roughly twice as many solutions as the brainstorming groups, and a panel of judges deemed their solutions more “feasible” and “effective.” Brainstorming didn’t unleash the potential of the group, but rather made each individual less creative.


In 2003, Charlan Nemeth, a professor of psychology at the University of California at Berkeley, divided two hundred and sixty-five female undergraduates into teams of five. She gave all the teams the same problem—“How can traffic congestion be reduced in the San Francisco Bay Area?”—and assigned each team one of three conditions. The first set of teams got the standard brainstorming spiel, including the no-criticism ground rules. Other teams—assigned what Nemeth called the “debate” condition—were told, “Most research and advice suggest that the best way to come up with good solutions is to come up with many solutions. Freewheeling is welcome; don’t be afraid to say anything that comes to mind. However, in addition, most studies suggest that you should debate and even criticize each other’s ideas.” The rest received no further instructions, leaving them free to collaborate however they wanted. All the teams had twenty minutes to come up with as many good solutions as possible.
The results were telling. The brainstorming groups slightly outperformed the groups given no instructions, but teams given the debate condition were the most creative by far. On average, they generated nearly twenty per cent more ideas. And, after the teams disbanded, another interesting result became apparent. Researchers asked each subject individually if she had any more ideas about traffic. The brainstormers and the people given no guidelines produced an average of three additional ideas; the debaters produced seven.


According to Nemeth, dissent stimulates new ideas because it encourages us to engage more fully with the work of others and to reassess our viewpoints. “There’s this Pollyannaish notion that the most important thing to do when working together is stay positive and get along, to not hurt anyone’s feelings,” she says. “Well, that’s just wrong. Maybe debate is going to be less pleasant, but it will always be more productive. True creativity requires some trade-offs.”

---
Show or Tell: Should creative writing be taught?


Creative-writing programs are designed on the theory that students who have never published a poem can teach other students who have never published a poem how to write a publishable poem. The fruit of the theory is the writing workshop, a combination of ritual scarring and twelve-on-one group therapy where aspiring writers offer their views of the efforts of other aspiring writers. People who take creative-writing workshops get course credit and can, ultimately, receive an academic degree in the subject; but a workshop is not a course in the normal sense—a scene of instruction in which some body of knowledge is transmitted by means of a curricular script. The workshop is a process, an unscripted performance space, a regime for forcing people to do two things that are fundamentally contrary to human nature: actually write stuff (as opposed to planning to write stuff very, very soon), and then sit there while strangers tear it apart.

Plagiarism, Copying and Creativity
---
The virtues of daydreaming.


The experiment itself was simple: a hundred and forty-five undergraduate students were given a standard test of creativity known as an “unusual use” task, in which they had two minutes to list as many uses as possible for mundane objects such as toothpicks, bricks, and clothes hangers.
Subjects were then randomly assigned to one of four different conditions. In three of those conditions, participants were given a twelve-minute break that entailed either: resting in a quiet room, performing a difficult short-term memory task, or doing something so boring that it would elicit mind-wandering. In a final control condition, participants were given no break at all. Finally, all subjects were given another round of creative tests, including the unusual-use tasks they had worked on only a few minutes before.2
Here’s where things get interesting: those students assigned to the boring task performed far better when asked to come up with additional uses for everyday items to which they had already been exposed. Given new items, all the groups did the same. Given repeated items, the daydreamers came up with forty-one per cent more possibilities than students in the other conditions.


The assortment of shapes shown below are part of a psychological creativity test. Participants are asked to take any three pieces and use them to build an invention, a tool, an animal, a toy—anything their minds can imagine. 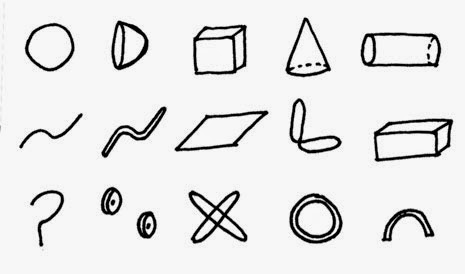 Since cartoonists have some of the most imaginative minds out there, I’ve put them to the test to see if they can meet this challenge, and come up with something funny to boot. As might be expected, the rules were not always followed. I guess that could be looked upon as cheating, or creativity, or maybe both. Anyway, here’s what they came up with: ... Bob Eckstein:

Just combine the three pieces anyway you like. They can be any size, and they can be made of any material. You can send us your result three ways: Reply to us on Tumblr, post on our cartoon Facebook page, or tweet your drawing with the hashtag #tnydrawing. I’ll discuss the best entries next week. [This was from 2012]

------
This is the longest post I have, uh, copied, in a long time.  More to come.  But don't delay.  I may well get a subscription to the New Yorker after this investigation.

Posted by Surprises Aplenty at 8:44 AM