Ivan Hernandez, half of the third greatest Game of Thrones podcast (I can't keep up the joke - the frikkin best GoT podcast), has tweeted his completion of a first draft to a book. This isn't that big  a news item, but he included a screen shot of his word count and it included surprisingly specific data. Click to enlarge: 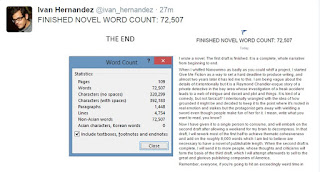 I wonder what tool he is using that specifies which character set it counts.  It doesn't mention Arabic, Japanese or Cyrillic, but Chinese and Korean are mentioned.

My novel from last year's Nanowrimo included three named Chinese characters and one named Korean but was written entirely in English. The many Russians, Nepalese and Kazakhs all have their names written in English so I have many Russian character but the word count would ignore them.  Not racism, cultural blindness, I think.
Posted by Surprises Aplenty at 8:39 PM