Why do I participate in Nanowrimo and what do I want from it?


The great success of Nanowrimo, I think, is in how it turns a solitary activity into a social one.  Ironically, as a Municipal Liaison, part of my job in the chatrooms is to briefly talk to other writers and send them away to write more.

I like how it has finally motivated me to write almost as much I want to.  I have 'completed' two novels in Nanowrimo.  The quotes are there because completion means 50,000+ words and my stories, the first one in particular, approach great battles that will decide the fate of many and... the contest was over.  I wonder how they end.

I haven't truly finished a first draft yet but the writing, the solving of problems for my characters, has been fun.

The research is interesting, too.  As a wood carver, when I decided to carve a blue heron, I sketched out spindly legs, a lump of a body, and an 's' shaped pipe - swollen at one end- for the head.  As soon as my knife hit the wood, I realized I didn't know what shape to make.  After looking at many heron pictures, showing the neck from several angles and how the feet attached to the legs and most importantly the difference in body between an ostrich and a heron, I was able to complete the carving.  My knowledge of the subject was more superficial than I had imagined.  With my writing, I have deliberately kept my stories more fantastical so precise descriptions of time periods, clothing and such could be faked or excused.  I have looked at a lot of maps to see if people really can walk from one point to another in an hour - strangely, this is what bothers me when it is incorrect.

It is weird how much of my elementary school grammar and punctuation rules I have forgotten and relearned for Nanowrimo.  Does the terminal punctuation mark belong inside the quotes or outside?  Depending on your nationality, yes it does.  For the US.

This year, I am writing a sequel to my 'Himalayan Steampunk' story and in doing so, I will need to set parameters for how the earlier book must finish.  I'm hoping this will encourage me to actually do.  And, this time, I will write an ending to my story; time to put in the calendar for Nov 20~25. 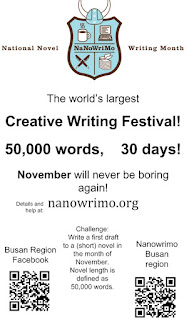 What do I want as an aspiring artist?  In my dreams, and I am aware of how far from reality they are - ah, somewhat aware - I imagine ten thousand to hundreds of thousands buying my book, or each book.  I'm working out how to move back to Canada and what I can do to support my family there and writing is something I - potentially - am good at.

NPR reminds me of the reality in What counts as book success might surprise you.  As an aside, this is a very link-baity title for NPR.  And I wasn't surprised.


Even so, he [Washington Post literary critic Ron Charles] was dismayed when he saw a story about the sales figures for the novels long-listed for the Man Booker. The list included The Green Road by Irish author Anne Enright, who's won the award before.

"When I saw that Anne Enright — [who] I think of as giant in literary fiction, beloved around the world — could only sell 9,000 copies in the U.K. I was shocked, that's really low," he says.

Nigerian writer Chigozie Obioma's debut novel, The Fishermen, sold just under 3,000 copies, which Charles says is not too bad.

"For an unknown writer?" he says. "Twenty-eight years old, no presence on social media. We're not talking Mindy Kaling, here. He's not sending his tweets to millions every day. Three thousand's not bad."

So what is a good sales figure for any book?

"A sensational sale would be about 25,000 copies," says literary agent Jane Dystel. "Even 15,000 would be a strong enough sale to get the publisher's attention for the author for a second book."

But if that second book doesn't sell, says Dystel, odds are you won't get another chance. And that brings us to the Authors Guild survey. Just over 1,400 full- and part-time writers took part in the survey, the Guild's first since 2009. There has been a 30 percent decline in author income since then and more than half of the respondents earned less than $11,670 (the 2014 federal poverty level) from their writing related income.

There is more to the article and I have excerpted enough.  Go read it, but maybe have a shot of booze ready to ease the pain.
Posted by Surprises Aplenty at 10:07 PM