I have read Scientific American on and off since 1986 and love the history of the magazine.  I buy individual issues now and then but mostly depend on the free content my newsreader picks up.  I notice that sometimes Sci Am will repost content from a few years previous once in a while and I have started making a blog post on content that seems really familiar, only to look back and see I wrote about already.  I don't know if this article is new or not but anytime you hear about Mihalyi Csikszentmihalyi  you should expect the report is a few years old.  I see he is still active but also eighty years old. With that caveat, here is an excerpt:


Here are eight ways of describing creative people that take into account their paradoxical nature and process.

Creative People Are...
Mindful Daydreamers
They are master observers of human nature-- and they use much of that material for their creative work-- but they are also able to turn inward and let their minds wander and imagine new worlds.
Imaginatively Gritty
They are intensely gritty, determined, and good at persevering against obstacles, particularly for imaginative worlds they are motivated and inspired to make a reality.
Passionately Introverted
For things they care deeply about, they have a lot of passion but they can sometimes come across as introverted when engaged in their activity because they are in flow focusing intensely and ignoring outside stimulation. Similarly, creative people can seem very extraverted during a performance because they are fully engaged with their passion, while offstage they came seem quite introverted.

---
Sci-Am also has examples of 'almost brilliant inventions' reported on during their 165 year history.  From that link, I clicked on two other links to find the actual slideshow. One image from 1865: 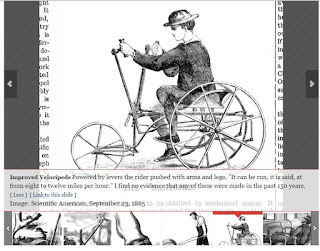 I have become a fan of the steampunk genre of fantasy these days and these attempts at patents are therefore doubly enjoyable.
---
What should you leave out, or allow to remain implicit in your writing?  Scientific research writing requires that every step, every idea by clearly stated and connected to recognized work.  In other situations, it may be beneficial to leave appropriate sized gaps that the reader must fill in.  These could be descriptive detail allowing the reader to add familiar images or imagine him/her-self in the story.  Or a gap in a chain of logic that the reader needs to think through to reach the same conclusion.  The challenge becomes making that gap the proper size.  Medium.com looks at the process:


This week, I came across an insightful piece about writing in The New Yorkerby writer John McPhee, who shares stories about his life as a staff writer and teacher of non-fiction writing but he also helpfully narrows his piece to the art of “omission.” What to leave out. The dictate of the Green # (see articlefor reference). Not just for publishing reasons (we need more space so get cutting) but also, for the sake of the reader engagement and involvement. Parse your story down and let the reader build it up.

The link to McPhee includes this excerpt:


Writing is selection. Just to start a piece of writing you have to choose one word and only one from more than a million in the language. Now keep going. What is your next word? Your next sentence, paragraph, section, chapter? Your next ball of fact. You select what goes in and you decide what stays out. At base you have only one criterion: If something interests you, it goes in—if not, it stays out. That’s a crude way to assess things, but it’s all you’ve got. Forget market research. Never market-research your writing. Write on subjects in which you have enough interest on your own to see you through all the stops, starts, hesitations, and other impediments along the way.


Oooh yes, let’s talk about planning boards, shall we? What’s your preferred strategy for such things? https://t.co/IQogS4vodi
— NaNoWriMo (@NaNoWriMo) September 11, 2015

The Kitty Chandler Tweet should include the stereotyped image of a detective looking for links on a bulletin board full of clues.
---
Many people get their books online. what should libraries do now?  One thing is to promote the privacy of citizens.  One library offered TOR nodes - a means to disguise or hide where the person is online - and the Department of Homeland Security has asked them to shut down.  I don't know precisely how this relates to the subject of this blog, but I love libraries and I like this attempt for them to stay relevant.  My son has enjoyed LEGO hour at the Penetanguishene library and I hope we will always have good reason to visit.  And that people can legally maintain anonymity online.
---
What would you add to a cctv surveillance sign? The images below are from the first page of a search for "cctv warning": 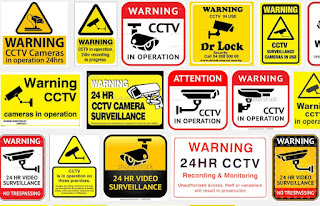 One man is fighting back against the suspicion-mongering these signs encourage with these additions: 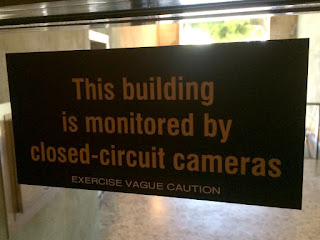 SO TRY TO LOOK REALLY COOL
DON'T SUSPECT YOUR NEIGHBOR: REPORT HIM!
FEAR THE UNKNOWN - MONSTERS ARE REAL
DRONE STRIKES AUTHORIZED 7PM - 5AM
AWARD-WINNING SECURITY THEATRE
YOU'RE PROBABLY GUILTY OF SOMETHING

I would add the following:
"Apt 602 man, quit picking your nose [and scraping it off with the railing]"
"Apt 103 man, why do you take the elevator to 50_ when the husbands in those apartments living there have left for work?"
"Think of the Children!"
---
Top scientists and the arts: 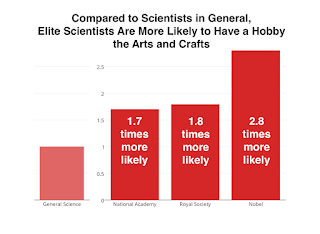 The image is from Price Economics. From the article:


Artists get a lot of practice letting their mind “wander.” And some of the great scientists of history employed techniques very similar to those used by the world’s greatest artists. Charles Darwin had a particular favorite meditative walk, and Benjamin Franklin gained his best insights in the bath.

Via Marginal Revolution
Posted by Surprises Aplenty at 7:24 AM