I've been spending way too much time on Quora these days, but I think my writing has improved as a result.  I'm sure Quora has an official description but I think of it as a thoughtful Yahoo Answers! or the like.  In my writing there, I have tried to explain things clearly and sympathetically to the person asking the question and those with similar questions.

I wrote 'sympathetically' because I spent most of my time answering questions about evolution and i try to imagine the (entirely anonymous) questioner as seriously asking and willing to learn.  That is not always the case away from Quora and admit with embarrassment that my responses have gotten hot and sometimes even rude. 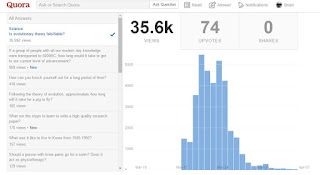 I am one of the top ten answerers, as voted by readers, in Evolution (process) and am quite proud of the fact. Many times, I see the problems with my writing but here is an example of positive reviews of my writing.  I'm posting it here so I can remind myself that I can write well, damnit!   Here is my top essay there:


Again, please stay on topic without mentioning theistic arguments or involving God in the discussion. Please answer scientifically or logically... Many failed to do so in previous similar questions...


Brian Dean, science enthusiast and evolution proponent
35.6k Views • Brian is a Most Viewed Writer in Evolution (process) with 30+ answers.


There are two major or popular ways to falsify the theory of evolution. First, the famous 'rabbit in the Precambrian' fossil and second, far less famous and more recently proposed, finding two but not three or four species with a common ancestor containing the same viral DNA at the same location. I will give more detail on these points, but first I want to offer sympathy with your question.

The Theory of Evolution has changed and adapted and itself evolved over the past 160 odd years that it sure seems that nothing can falsify or disprove it. Lack of fossil evidence? ... Well, uh, Punctuated Equilibrium. Natural Selection isn't enough on its own to allow evolution of all the diversity we see? ... Well, uh, Sexual selection, Genetic Drift and Founder Effect can be used to patch over the flaw.

More specifically, the theory of evolution somehow explains the human reproduction strategy of having few offspring and caring for them nearly forever and the salmon strategy of having thousands of eggs and not caring for them at all. (Note these are termed K- and r- selected strategies are are well explained here: K and r reproductive strategies )

Here I will say remind readers that I am an evolution proponent and described the above difficulties with acceptance of the theory as examples. Punc Eek does explain the fossil record pretty well, for example.

The problem for evolution is that there are so many different strategies for success. Just as the US Navy does not use aircraft carriers exclusively, but rather a wide variety of craft suited to different purposes, small, simple living things succeed in situations where larger, more complex living things do not, and vice versa.

Further, the asteroid impact that killed the dinosaurs and made room for mammals to grow and diversify has no place in the theory. The diversity of life is a complex mess and further confusion is added by inorganic events.

All that said, back to my two claims on how the theory of evolution could be falsified or proven wrong.

The "Fossil rabbits in Precambrian deposits" suggestion was an offhand one made by J.B. Haldane (Wikipedia tells me this may be untrue: Precambrian rabbit ) and can be expanded to mean any mammalian fossil found in rock over 250 million years old. From that same link are some reasons why such fossils might not disprove evolution:
" The first question raised by the assertion of such a discovery would be whether thealleged "Precambrian rabbits" really were fossilized rabbits. Alternative interpretations might include incorrect identification of the "fossils", incorrect dating of the rocks, and a hoax such as the Piltdown Man was shown to be."
Still, something of this sort would cause great problems for the theory.

The discovery that viruses can and do insert occasionally their own genetic material into Eukaryote chromosomes is relatively new. The image below is slide 17 of this lecture PPT set: Bio%201130 c%203 19%20lecture

If Chimps and Bonobos shared the same bit of viral DNA and we did not, that would be no problem for the theory but if Gorillas and chimps carried the same viral DNA and we did not, this would be a serious problem for the theory. Or, if humans and gorillas carried the viral DNA but chimps or bonobos or both did not, we would have the same problem. There is evidence -somewhere and I cannot find the link or citation - for gorillas and orangutans that share the DNA of a specific virus that we humans do not have. Further study (again, going from memory only) showed the viral DNA was on different chromosomes and although from the same type of virus were different segments (gorillas had section A of the viral DNA and orangutans has section G, while the shared ancestor DNA should be of the same section), implying that there were two separate viral DNA insertion events.

I would suggest a third thing that would prove evolution false would be eyeless vertebrates.... wait, there's a catch. There exist eyeless fish but these cave-dwellers actually have eyes that are covered by flesh. If a mammalian species were found to have no eyes and no vestiges of ancestors with eyes or genes for eye development, this would be a huge problem for evolution.

Finally, and I am brushing against your limit against mentioning religion here, if we ever found the creatures that some creationists think evolutionists need, that would disprove evolution hard! I am writing about the 'croco-duck' the 'Bird-dog' and the 'bull-frog' that were championed by Ray Comfort and Kirk Cameron. And also the 'frunkey', that one creationist felt should exist between frogs and monkeys.

As a test to the asker:
"Please answer scientifically or logically... Many failed to do so in previous similar questions."
Can you link to such an example?

135 design facts - in slideshow form, but still interesting.  There is a lot about fonts which isn't my favorite, but other subjects are also covered. At Nik's Learning Technology Blog, Nik looks at software to make interactive infographics.  I want to do this now.
---
Randall Munroe makes the XKCD comic and also has written a few books explaining various scientific ideas. A recent book described many concepts and technologies using only the 1000 most common words. I like the challenge of the idea but my understanding is that many circumlocutions were required to work around the limitation.  Such tricks do not always make the subject matter clearer.  Again, I like the idea but I probably won't use it with my ESL students who are themselves limited to a similar vocabulary.  If I wanted to, I could:  There is now a text editor that restricts you to those most common words.
---
Iggy Pop explains American Valhalla.
---
How to write about scientists who are women. Tip: Don't ask about clothes or cooking.

Posted by Surprises Aplenty at 9:14 PM