I want to be obsessed

A lot of psychology is biology and I know a fair bit in that field.  One course I took, Animal behavior, was  a strong introduction to the subject.  In this post, I will write about what I think of as obsession. I think I follow the basic definition Google offered at the top of its search window:


an idea or thought that continually preoccupies or intrudes on a person's mind.
plural noun: obsessions
"he was in the grip of an obsession he was powerless to resist"
synonyms: fixation, ruling/consuming passion, passion, mania, idée fixe, compulsion, preoccupation, infatuation, addiction, fetish, craze, hobbyhorse;

but I want it clear I make no claim to the psychological definition of the word and that I find the casual use of 'OCD' to be annoying.

I recently wrote to a friend about our obsessions.  He put himself on a strict diet for two weeks to see what would happen and one result was he dreamed and lusted for the wondrous food he would eat after the two weeks had passed.  In 2015, I gave myself the goal of running 183 times in the year. I, uh, like talking about the thing I was obsessed with; that can't be a surprise, but it really isn't a subject relevant to this blog.  I'm still going to write about it, but I posted it in the 'read more' or 'under the fold' area.  If you want, you can find it there.

The point of the longish story below is that I set goals and stuck to them pretty well, even though I didn't really enjoy them. Or I enjoyed them but also found them exhausting and irritating.  My friend, struggled through his labour and doubtless enjoyed seeing his weight drop and feeling physically better even though it presented a physical struggle.

I have a blog post from Asana open. It is called Working from home? Here’s how to stay on task.  I really should read it. I'm good at finding such articles, and I read many of them.  Reading is good.
It would be much freakin' better if I convinced myself to follow such articles!

In the eighties and early nineties, I watched Prisoner of Gravity, as TVO show about science fiction and fantasy books and movies. In season four and five, there were episodes with advice for writers.  One point I remember from those episodes was the advice, 'If you can find something else to do, then do that instead'.  You needed to be obsessive and driven to write for it to work.

I have a job.  I'm an ESL teacher and I work to make the subject interesting to my students, many of whom are there chiefly because they have to be.  I have large periods of time off and I always plan to revamp my teaching and try new ways.  And I do, I still think I am a good teacher, but not nearly as much as I could.

I started this blog to document my research into creativity and to understand how to do and how to teach it.  I definitely know enough that I should be a creative person now. And when I have a problem, I use creative methods to find a solution. But I am not producing much, if any, more than I did when I began at Creativiti Project.

So, here are more than fifteen hundred words about writing that aren't directed at the story I have been trying to write for the past few months. It seems that I need to trick myself to write.

I am creative.  I need to be obsessive.

I love Grant Snider's comics and this one seems a relevant.  I have shrunk it here, follow the link for the full size version or ways to buy it. I added the red circle: 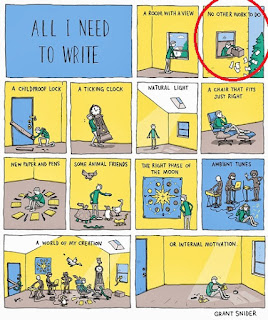 I either need no other work or I need other work I want to avoid.  Actually, I would probably avoid both.


Thinking about running was exhausting for me

In February of 2015, I decided I should set some goals for my running.  I started with the goal of average a run every other day for the year, even though I had already missed forty days or twenty runs.  I would catch up.  The distance also had to average out to 5.4 km (that number chosen because of the running track itself).

I started out too fast and was hurting after a few runs.  I eased off, both in distance and speed, and felt better and was soon able to increase the distance back to where I wanted.  The speed also improved somewhat with time.

So, I was behind in both number and distance, and I liked that.  Every time I ran 5.6 km, I added .2 km to a previous run until it matched the minimum.  Instead of running three or four times a week, I typically ran five times and had more than one streak of nine consecutive running days.  The distance became easy and I increased to aiming for an average of 6.7 km, then 7.2 km per run.  Naturally, this meant I was running more than 7.2 km because I had to make up for previous runs.

Actually running fun.  I would listen to music and enjoy the weather.  In the summer, I would wake up at 4:00 am to get the run in before it was too hot.

The running was fine, even fun, but the planning was driving me nuts.  Every day, I would wake up and think, "When will I run today?" I would also recalculate my averages and how quickly I could get them up to the goal.  Running itself took a  lot of time.  A forty minute run required more than an hour, with the shower and such added in.

At school, I would hobble up and down the slope (my university is on a mountain side and the vertical distance from the lowest building to the highest one was perhaps two hundred metres.)   One way I knew I hadn't run in a while was that I didn't hurt as much.

Once I was on track for my goals - I had caught up in the number of runs for that day of the year and was at or over the distance, I couldn't ease back to maintain that position.  I now needed to think about the winter.  I needed to imagine that November and December would have few good running days so I needed more in the back.  At the beginning of November, I needed 152 runs to be exactly on pace but I couldn't expect to get thirty runs in during those last two months so I wanted 170 at that time. And if I were over in distance, then I would be able to do shorter runs in necessary....

I thought about this all the time.  I am not sure how annoying I was to my coworkers but they would bring the subject of running up when talking to me so I had to have mentioned it a few times at least.
In October, I injured my right hip somehow and couldn't continue the runs.  I was able to go five km before it hurt too much, then four km, then I took a week off.  When I restarted, the pain was still there. I took more time off and finally the pain went away but I was unable to catch up to match my goal.  It might be surprising, in a goal about obsession, that this didn't bother me that much.  I had worked to the best of my ability and in this one regard was comfortable with not achieving 183 runs in a year.

One thing that did bother through the years was how I had to reduce other activities. I swam a few days a week but only as a rest and recovery treatment for my legs.  I inline skated maybe three times.  I hiked five times.  In years past, I had bikes, skated and hiked a lot more than that.  I like biking, skating and hiking.  But I didn't have time or energy for them.

This year, I prepared a new exercise goal, one that mathematically allowed different activities to be compared and included.  Ten km of skating would be five km of running.  One km of swimming would count as two km of running...  It is no April 19, and I have exercised maybe twenty times so far - I should be over fifty.  I have no drive, no compulsion this year.  I ran about 120 times last year and couldn't care less about running this year.  Intellectually, I know I need to run and exercise and I have regained seven kg of the ten kg I lost last year.  These points don't push me to exercise the way I felt pushed last year.

In each of the past three years, I participated in an event called NaNoWriMo or National Novel Writing Month. It started in the USA but the first word should now be "International".  In November, participants strive to write 50,000 words. Physically typing seventeen hundred words or more every day took me less than two hours but I needed to have ideas and think and dream about my story.  Including the typing, I was thinking about the story three or four hours every day.

After the 2015 NanoWriMo finished, I wrote longer than I ever had before. I was consistent for ten days and sporadic for another two weeks.  This year, I have added fifteen hundred words to the story and have the window open now to continue typing.  For some reason, this blog post seemed more important.
Posted by Surprises Aplenty at 5:16 AM