TWIC: Some weird and fun stuff

Tired of making your own poetry?  Let the acrostic poem generator take up that burden.

----
This thinking putty looks like it would be a lot of fun.... for ten minutes.  Well, that's my average for Silly Putty and the like. Still, magnetic, transparent, UV sensitive and more; at least eleven minutes.
----
Kinda, sorta related to creativiti: The international art market is a money laundry.  Creative works of art and creative accounting!


If you've got $50M you need to hide, and want to be able to move around invisibly, what better way than to buy a painting through a secret, numbered offshore account, stick it in a vault in Basel, whence you can liquidate it, retrieve it, and move it on a moment's notice.

This need for liquidity explains the economic paradox of the giant markets in the work of Picasso (who was insanely prolific) rather than artists who are held in equal regard but produced much less material. If you're interested in a painting as a store of value instead of a work of art, it won't do to invest in something that isn't being continuously bought and sold.

------
I'm listening to some epic music while I type this.  24 hours a day of epic music.  Much better than the 15 minute clip I used to listen to. Both are fine as background music, probably better for exercise or more physical artforms rather than writing.
----
The British Library has posted around a million copyright free images from pre-1900 books.
Image taken from page 111 of 'Corea, the hermit nation. I. Ancient and mediæval history. II. Political and social Corea. III. Modern and recent history': 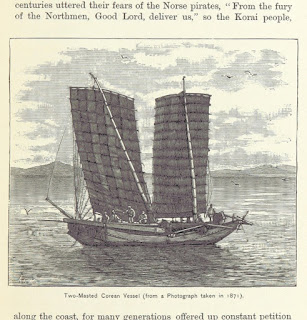 If you know me then you know that after a quick, guilty search for 'nude' the next search would be Charles D. Here is one result: The Beagle 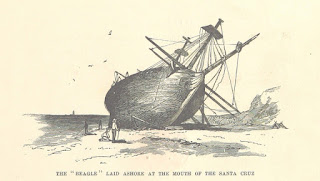 --------------------
I wrote recently about wanting to be obsessed with writing.  These days I do more writing about creativiti than actual story writing.  If only I could dream and talk in my sleep describing my dreams so the story could be recorded that way.


McGregor’s tapes offer hundreds of hours of one man’s slumbers narrated in astonishing detail. The stories are full of eccentric characters like Edwina; they occupy a sinister place where a simple Lazy Susan can suddenly inspire a dangerous game of Russian roulette.
“It’s such a treasure trove of recordings – unlike anything that existed before,” says Deirdre Barrett at Harvard Medical School.

Several audio clips can be found at that link.
Posted by Surprises Aplenty at 5:05 AM