Among other ways to improve a book lover's life, I like this 'book thing', a chunk of wood made to fit over a thumb so the person can hold a book open with one hand (#5 on the list. This image has been shrunk.). 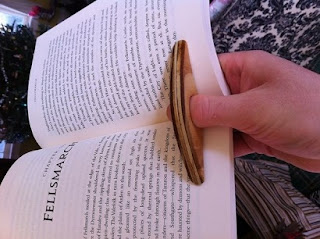 The next time I have a chunk of wood in hands, I intend to make one.
---
I am attempting to write a 'steampunk' novel. The genre imagines what science fiction would look like to the Victorians.  My novel has steam powered aircraft, and much more! Enough about my book (due out in ebook form let's say in February 2017).
There are two new genres courtesy of China.  First is silkpunk and my understanding is that it imagines science fiction from the viewpoint of the ancient Chinese.


silkpunk is a genre that straddles the boundary between science fiction and fantasy. Thus, while the book features technology like silk-draped airships, soaring battle kites, underwater boats powered by steam engines, and lodestone-based metal detectors, it also contains magical tomes that describe our desires better than we know them ourselves, gods who regret the deeds done in their names, and giant sea beasts that bring about tsunamis and storms — but also guide soldiers safely to shores.

New is Ultra Unrealism, based on the lives of contemporary Chinese officials.


The barrage of nearly unimaginable corruption stories (the judge who died and had four widows come forward, none of whom had been aware of the others, all of whom had been married to him at the same time, thanks to marriage licenses he procured) has inspired a literary movement in China, "chaohuan," or "ultra-unrealism," that builds on the popular translations of Latin American magic realism but with Chinese characteristics, inspired by a civilization that has endured for 5,000 years with a succession of near-absolute rulers at its helm.

The link above includes four rules for writing Ultra Unrealism.
---
Vonnegut wrote and lectured on the shape of stories. A deep study of many books has confirmed his opinions and offers six typical emotional arcs in stories.


Andrew Reagan at the Computational Story Lab at the University of Vermont in Burlington and a few pals... have used sentiment analysis to map the emotional arcs of over 1,700 stories and then used data-mining techniques to reveal the most common arcs. “We find a set of six core trajectories which form the building blocks of complex narratives,” they say.

A Lee Martinez wrote a post on Boingboing about inspriational pulp heroes as an introduction to his/ her own character Constance Verity. After some quick Googling, 'his'.
The thing is, in addition to noting his new book, he gives some insight into other pulp heroes, Tarzan, Doc Savage, Tars Tarkas and Nancy Drew.  I wouldn't say the insights are deep, but they are worthwhile reminders and I love the addition of Nancy Drew and his explanation for why she fits in the group.


The problem with Doc is that he’s too good. His adventures were great, but you never had the impression he couldn’t handle them, and even in the calm moments, Doc never seemed out of place. He makes up for it by having some of the wildest adventures, but his inhuman perfection is a problem.
Making a character relatable doesn’t mean they have to be weak, but if they don’t ever have an awkward moment, it’s hard to care. For Constance, the quiet moments are awkward. She can defuse a bomb and outfight a ninja, but dating and just hanging out with friends can be dangerous territory.

---
With the success of Pokemon Go, the game with terrible information sharing requirements, comes #PokemonIRL. At the link, you can find templates to add your own animal pictures to and share some In Real Life critters.  As I will be teaching a practical biology class in two weeks, I am eager to make a few.  Here is my first attempt: 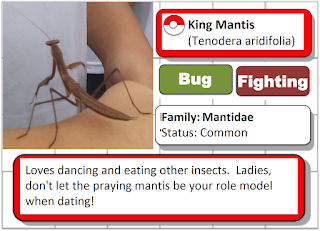 I will leave out the dancing foolishness on the next one I make.
-
Oh, be careful using the Pokemon Go App.  I alluded to security  problems in the opening sentence; here are some details:


...on a whim I went to see which permissions it was granted (you can see for your own account right here). To say I was a little stunned is putting it lightly - it said:
Pokemon Go has full access to your Google account ...
Let me be clear - Pokemon Go and Niantic can now:
Read all your email
Send email as you
Access all your Google drive documents (including deleting them)
Look at your search history and your Maps navigation history
Access any private photos you may store in Google Photos
And a whole lot more