TWIC: Dialog, King and Martin on writing, writing about others, inspiration, photos, guns and elephants

Good dialog - a video essay about movies but applicable to books, too.
---
GRR Martin and Stephen King talk about writing.
King "How can they understand when we don't understand [what we do]?"
---
In the story I am currently working on, the main characters are Korean, Canadian, British, Nepalese and Chinese.  I desperately hope the end result is not racist.  At the same time, the story is 'steam punk' so the viewpoints of the white characters are at least tinged with racism even if the book is not.  Further, for the purposes of the book, characters of one specific nationality are the bad guys.  Sure hope this turns out well.  Maybe this book will help: Writing the Other, by Nisi Shawl and Cynthia Ward.
---
Inspiration is contagious. One of the five conclusions of the research described:

---
Writing about guns. When I take a pro gun-control position in argument, I try to point out that one needed know much about caliber or magazine size or what the AR in an AR-15 means (I do know that it isn't Assault Rifle and also that it is unimportant when discussing if they should be banned).  However, if one wants to write a crime or spy thriller or a story that mentions guns in passing, it is important to know a few things about them and Benjamn Sobieck seems to know them.
---
Free stock photo sites. I am not clear on what uses these photos can be put to.  As the operator of a blog that I have nothing to monetize, I have considered myself safe using what I think is 'fair use'.  Still, these archives are likely to be handy for some.
---
It seems it is easy to carve pencil leads.
"From there, it's just a matter of carving the graphite into an elephant shape!"  I should use the word, "just" more often. 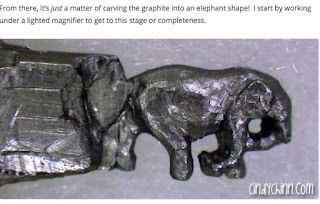 .
Posted by Surprises Aplenty at 8:03 AM