I am a Canadian, living in South Korea, but I watch the US presidential  race with, ah, amusement? Horror?.. When I get irate, I remind myself I cannot vote for either party, or anyone else, and try to return to amusement.

The following discussion centers on quack Mehmet Oz and specifically on a sentence describing him in the New York Times. The article is about Donald Trump, but, for this post (and generally for this blog), I am not interested in him. 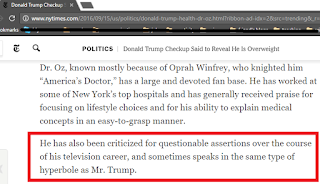 What does it mean to criticized or 'sometimes speak[s] in ...hyperbole"?  It means:
Lying about weight loss claims.


Sen. Claire McCaskill, chairwoman of the Subcommittee on Consumer Protection, Product Safety and Insurance, led the panel that on Tuesday looked at false advertising for weight loss products. Subcommittee members took issue with assertions that Oz has made on his show about products that don't have a lot of scientific evidence to back them up, such as green coffee beans.

The article notes he did the same thing with Garcinia cambogia.

His Wikipedia page shows his lack of integrity in various ways.

Science Based Medicine notes he has found '16 miracles':


That New York Times writer has a gift for spin.

Via Boingboing.
Posted by Surprises Aplenty at 8:54 PM