Making it small in Hollywood. Mike Birbiglia is being a little modest.  His six tips look good.  Here are excerpts from  two (this is from the New York Times so I cannot copy and paste even small segments):

Via Kottke.
-----
Oamaru, New Zealand is the steampunk capital of the world!


For the uninitiated, the term steampunk was coined in the 1980s and is based on imagining inventions the Victorians might have created for the modern world. The movement was kickstarted by science fiction novels and has branched out to incorporate art and fashion while spawning a well-established aesthetic, typified by embellished hats and goggles. 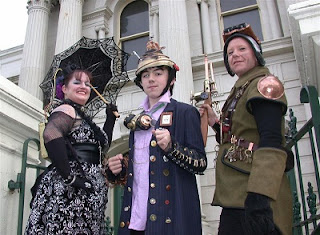 I want to read the rest of that story.
---
I saw a comic on a friend's Facebook page. The panel showed a spoiled student with his feet on his desk during the pledge of allegiance. I shrank the image and added another panel.

The artist, Steve Breen apparently drew that panel nearly six years ago.  I want to properly attribute his artwork and so I found his webpage.  Strangely enough yesterday's panel took the opposing viewpoint. It suggested that Kaepernick's choice to stand or not during the pledge or the anthem was what made the US great.  Good for Breen on becoming more progressive.
---
In writing the above, I wasn't sure of my comics terminology.  Wikipedia and readwritethink had me covered. From the latter: 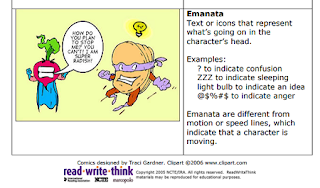 Readwritethink is geared toward students while Wikipedia is more in depth.
---
I have more than one blog.  I keep this one fairly tightly focused on creativity but I have other interests. I seldom post on my SurprisesAplenty blog but just did and if you have any interest in this humble blogger as a human being, you can read about it.
Posted by Surprises Aplenty at 6:11 PM