On Quora, the question How do you write a good grant proposal was asked and answered.
The answer (so far there is only one) is to find examples in books or in a Google search.  Most such proposals are generally vague and dry so adding some detail and working to make them interesting is important to be noticed.
--
Jeff Vandermeer's Wonderbook is one of the most beautiful I have seen.  Now I need to read it.  He has given lectures on the same content using images found in the book.  Find it here.  The image below, from the link and the book, has been shrunk. Click on it to a somewhat larger size or follow the second link to see it full-size. 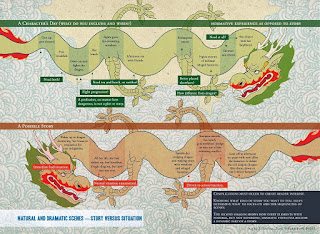 ---
'Verbing' is annoying for some people.


If you’ve ever been in a conversation with someone who makes liberal use of the verb form of summer – which is, coincidentally, also its nominal form – you’ve probably rolled your eyes at such egregious snobbery. Unless, of course, you were simply waiting your turn to share about your own summering, in which case it is probably correct to assume you also enjoy yachting, golfing, and cardiganing.


Indeed, in 2007, when Mike Huckabee was a candidate for the Republican nomination for US president, he used it on the campaign trail to differentiate himself from his Ivy League rivals: “For my family, summer was never a verb. We never summered anywhere.”
Well, plenty of other people have summered – for more than 500 years. According to Trish Steward, assistant editor at the Oxford English Dictionary, the verbal use of summer “goes back quite a long way,” its first recorded use being 1440.

I believe this is described as fossilization of a language.  The words and forms you heard as a child will always the the 'right' ones.   Verbing doesn't bother me that I can recall. As a competitive swimmer, the verb 'medalling' was common enough that it never upset me.

Other examples that affect me are Gonna, Wanna, and Hafta, but the one that really grates on my ears and seems common in the UK is "Haven't got". It's "Don't have", for crying out loud!
---
Twenty-eight thousand words in a single flight.
The article is difficult to summarize but here are his main points.

The author travels business class and can plug in his computer so he has power for the whole flight. I love Ommwriter (the Mac version is better) and Flux apparently resets the lighting so your eyes don't ache in low light situations.
---
The latest Hugo Awards shenanigans.


Question: If you could pick a single writer to make an effective, compassionate statement about identity politics to a divided literary community, who would you pick? Would it be a schizophrenic, autistic person who’d authored an e-book called Space Raptor Butt Invasion?
For years, writers and fans of science fiction and fantasy have been confronting that first question. And inadvertently, at the behest of right-wing trolls, the answer to the second question has recently become yes.

---
Lessons for Story Tellers at the World Domination Summit

(2) You can always edit more than you think
What it is the point we’re trying to get across with this story?
And then,
What can I cut out, but still get this point across?
It’s brutal. But in the end, I managed to edit some stories down to 30 seconds – which gave us wiggle room to add some details back in


Boingboing has a quote from him with a link that didn't work for me.

As a dabbler who hasn't done enough continuously enough to learn by doing, videos like these are wonderful.  At the beginning, Diresta makes his block on two sides with the rough shape of his spoon.  Of course, once he cuts on axis, the marks have been removed. What does Diresta?  He applies glue to the part that will be next cut off and rebuilds his block. Then he cuts again and the rough is cut free top and bottom, left and right.  That was worth the price of the video right there.

And a graphic reminder: 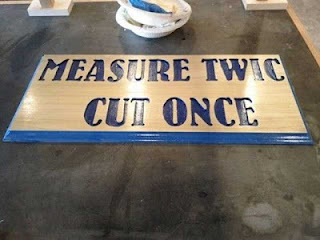 This image was many places. I found this one on Reddit.
---
Pelee Island Writer's retreat funding on Indiegogo.


The funds raised in this one-time effort will be used for the start-up costs for the Pelee Island Book House and Writers' Retreat. Known for its beaches and birding, the island's quiet beauty makes it an ideal location. Perks are offered at every level,

---
Work free, for exposure.
I, uh, am attempting to write a (very) short story for this blog every week - see 'click bait' for stories - to produce content for this blog to attract eyeballs and good feeling from readers so that when I publish a book,there'll be some people to read it.  Maybe even pay for the dubious pleasure of reading it.  These stories are free - and that is probably a realistic measure of their value - and i do it for exposure.
Of course, I am doing this by choice, on my own platform.
At For Exposure, there is a long list of screen caps showing people asking for artists to work for free and getting angry when the artist asks for money. The above link is to a Twitter account and I think the examples are collected here on Imgur. As always, I have shrunk the images. To see them fullsize, and many, many more, follow the link. 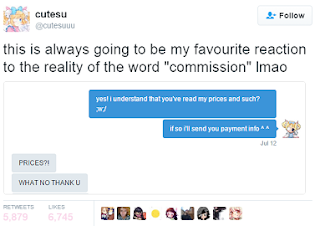 
IN AN ERA OF JOURNALISM in which freelancers have grown accustomed to being treated like disposable cogs of news production, Vice appears to be in a league of its own.
Interviews with more than a dozen freelance journalists suggest the young, edgy news organization heralded as the future of journalism also has ushered in a new low for its treatment of freelance journalists.

Via Boingboing.
Posted by Surprises Aplenty at 12:37 AM