This was on Facebook without attribution. I shrank this image greatly.  If you know where it came from please let me know. If you want a larger version, I presume Google will help. 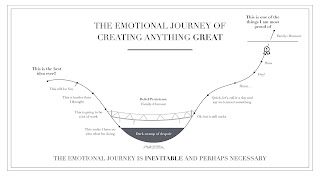 ---
How the Beatles succeeded.


The thing that got John and Paul writing songs together at the ages of 17 and 15, respectively, is, I think, the same thing that ultimately made the Beatles the Beatles. It’s there in Lennon’s remark about Buddy Holly’s three-chord compositions—“why not write your own?” It’s there in the capital letters—ANOTHER LENNON-MCCARTNEY ORIGINAL—that McCartney scrawled above each set of new lyrics. “Teenagers all over Britain liked Buddy Holly and rock and roll, but of that large number only a fraction picked up a guitar and tried playing it, and fewer still—in fact hardly anyone—used it as the inspiration to write songs themselves,” Lewisohn writes. “John and Paul didn’t know anyone else who did, no one from school or college, no relative or friend.”
The Beatles’ secret ingredient was arrogance.


But the best line, as usual, is Lennon’s, and it appears on the last page of the book. “We thought we were the best in Hamburg and Liverpool—it was just a matter of time before everybody else caught on,” he told an interviewer in 1980. “We were the best fucking group in the goddamn world … and believing that is what made us what we were.”

---
This challenge has already started but a motivated person could catch up. The 90-day challenge.
---
Creative writing competitions  in 2017.
---
Where Canadian writers feel at home.
---
I like this idea for taking notes:

I learned today that a group of students used a Google doc to take lecture notes-- they all took notes simultaneously in a collective file.
— Stephanie McKellop (@McKellogs) December 20, 2016

---
An infographic from Josh Burnoff (I think the Creative Commons license means I can share the full size image): 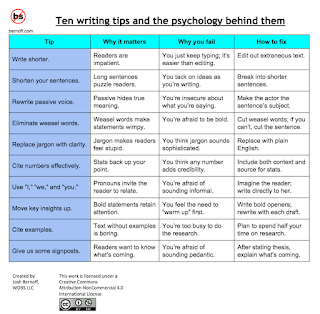 
So far at this blog I have not tried to make money due to my 'expertise' in the field so that separates me from the targets of this rant:


In these pitches there’s nothing to suggest the person has any original experience or research or insight to offer said advice. Instead they choose to quote other people who quote other people and the insights can often be traced back in a recursive loop. Their interest is not in making the reader’s life any better, it is in building their own profile as some kind of influencer or thought leader. Or, most frustratingly, they all reference the same company case studies (Hello, Apple and Pixar!), the same writers, or the same internet thinkers. I often encounter writers that share “success advice” learned from a blogger who was quoting a book that interviewed a notable prolific person.

2) Set your environment up to support you.
I’m a huge proponent of setting up your physical and digital environments to support your larger goals. Most of us were full of work worries and family drama and existential concerns even in The Beforetimes; now we’ve added on American facism and the literal threat of nuclear war, yet we still expect to get our work done by strength of will alone. As the astute Krista Scott-Dixon writes,

Your self-control is busy preventing you from stabbing your boss, shoplifting, and running red lights. Thus, “willpower” won’t help you much…. It’s an overdrawn bank account. Use stronger stuff: scheduling, structure, social support, space, systems, and strategies.
When it comes to Productivity in Terrible Times, we’re operating on a number of fronts:


asdg
Posted by Surprises Aplenty at 7:44 AM