I had an idea for a blog post; I would measure the difficulty of the vocabulary of a book I had just reread. I expected in the course of research to find that this book used a lot of difficult words. I appear to be wrong about that. If anyone is interested, there are two websites in the body of the post that can measure how many tough words you have used.

1983 edition of Book 3 of May's saga of Pliocene Exile, softcover. 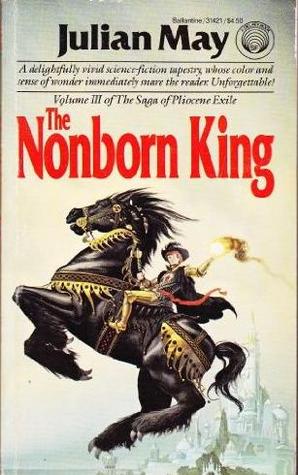 Image from Goodreads.
I first read this book around thirty years ago and saw it in a used book store recently so I reread it. I was greatly surprised that I didn't know the meanings to all the words - the text is pretty advanced.
I mean, I was able to puzzle enough of the meaning out that could follow, even enjoy, the story but two or three words stopped me in my flow of reading.
It made me wonder how difficult the text is. As an ESL educator, I am aware of a few websites that measure the difficulty of a text.

I used English Profile Text Inspector and started with an excerpt from a Jack Reacher story. 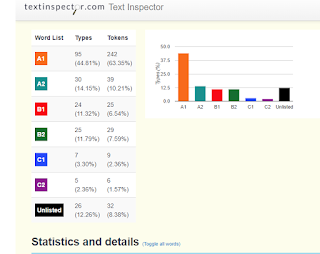 And then had to type an excerpt from the Nonborn King- I could find the text on Google Books but that only had images of the text, dang it! Anyway: 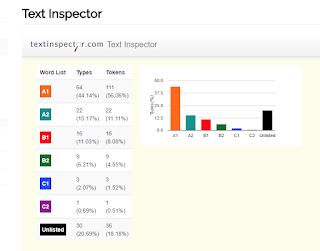 Dang! I figured the May text would have more difficult words than the Child text, but there are quite similar. I didn't think to check the black bar on the graph until after I did the Nonborn King. With it, I know that the software is part of the problem. 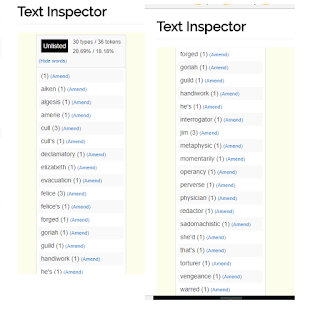 Ah, the software didn't double a few words, that is an artifact of how combined screenshots. Anyway, there are some simple contractions - "That's" for example, as well as names that are common (as opposed to common names). It may be that my measuring site is not up to the task.

Let me try another text inspector, this one actually having the name Text Inspector. 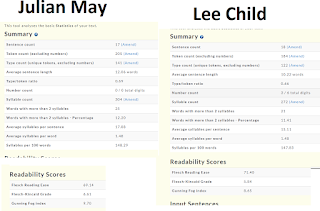 I can't say why I chose a Jack Reacher book by Lee Child for comparison purposes. Without any reason for the opinion, I had figured it would be a simpler text. And yet the two are quite similar. Huh. It may be that comparing excerpts of less than 250 words does not create a useful sample size.

Posted by Surprises Aplenty at 4:21 PM