Below is the start of a poster that I probably need  on my wall to remind me to get to work.  Follow this link to see the rest. 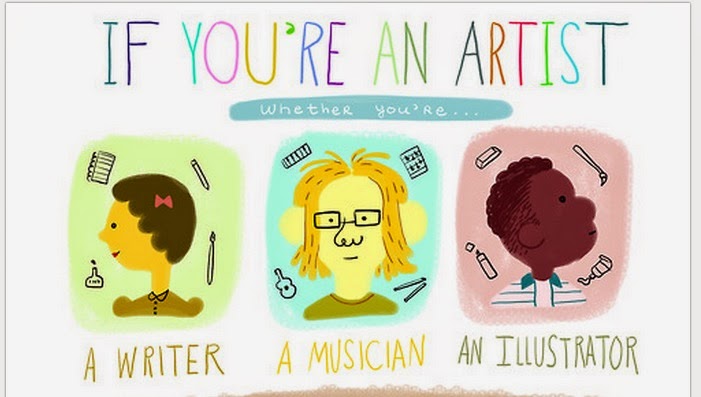 
Creative writing is part of being a kid. Writing and reading goofy stories of lost kingdoms and Mars colonies helps the imagination grow strong. But a recent study uncovers an interesting, perhaps even dismaying trend: this generation of kids seems to prefer narrative realism when they write.
In a study published earlier this year in Creativity Research Journal, researchers at the Harvard Graduate School of Education and the University of Washington asked the question, “How have the style, content and form of adolescents’ art-making and creative writing changed over the last 20 years?”
To answer that, researcher Emily Weinstein and her co-authors, including Katie Davis, co-author of The App Generation, examined two distinct eras of teenage self-expression for the traditional hallmarks of creativity (such as originality, complexity and sophistication). After analyzing 354 visual artworks and 50 fiction stories, from two separate time periods, 1990-1995 and 2006-2011, there’s good and bad news.
The good news? Adolescent visual proficiency has improved. The bad news: teen creativity and technical skill in writing has declined. Instead of imagining Martian neighborhoods, the App Generation has been describing their own summer plans.

I am a science fiction and fantasy fan and have been forever.  Despite that, in real life, I am fairly pragmatic.  I don't think my love for fantasy reading has caused an over-developed desire for the fantastical in my quotidian life.  Still, creative writing doesn't require centaurs and elves or spaceships and the like.  One can create realistic but still imaginary dialogues with others or imagine likely events in the future.

I do like the books mentioned as appropriate to kickstart a teen's creative writing.  One of the books recommended is Mary Shelley's The Last Man.  I have just downloaded it and will read it soon.
---
Scientific American is one of my Feedly feeds and I am often interested in what they describe.  However, they tend to offer only short introductions with the expectation that you will buy the latest issue to learn more.  I used to do that, but living in South Korea has restricted my access.  If you want, here is a link to several articles on creativity - it is of limited value to me.
Posted by Surprises Aplenty at 7:55 PM