I recently gave a talk on creativity and how to encourage it in the classroom.  I'm not all that satisfied with the talk I gave; I think I tried to ....no, no point in weasel words.   I know I tried to fit in too much information and content into 45 minutes.  My biggest fault was first explaining how some research shows brainstorming doesn't increase the creation of new ideas, then spending time explaining how to brainstorm.

Ah, I've had a beer and didn't have lunch.  I hope I'm making sense.

The talk was satisfactory and one person in the audience had a lot of fun with my activities and really made me feel good about them.  Good work, dude whose name I never got.

Early in the talk, I stated that after ten years of studying and blogging about creativity, I didn't think I was creative.  I told the audience I would explain that at the end of my talk.

But the end of talk was rushed and I didn't explain it.

What I planned to discuss was my creative output; the total amount of creative work I have produced.  And I planned to say I hadn't made all that much.

In thinking it over, I believe I undersold myself.  Or, um, I would have undersold myself to the audience if I had explained the point.  Instead I left them curious and unsatisfied.

I have written two 'books' with Nanowrimo and have been working on a third.  None are close to being published.  I have ideas for three short stories.  The main points are fleshed out but have not been written.  I have two or three plans and even drawings for wood carvings but haven't touched my gouges and chisels in months.  I have plenty of ideas but I have a low production rate.

In the past two years, I have prepared 40 Google Slideshow presentations for the science camp I teach at, and at least a similar number of slideshows for my university students.  I lectured my son's classmates on my work at the Wye Marsh in Ontario,Canada and on water safety.  I have prepared and led many activities at Dongseo University's English Cafe...

Student needed to put these pictures in order and tell a  story. 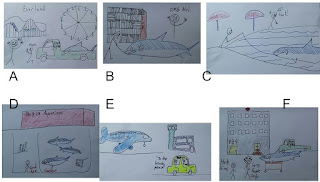 I have created a lot of content but for work rather than for my own unfettered desire.  And yet, it has not been exclusively work.  I enjoy teaching and have managed to insert fun and games and joy into my classes.

I've created a lot of content.  I am creative.  I don't want to turn into Stuart Smalley for this post, but I do want to admit to myself that though my creative output has been less-publicized, it is still real and useful.

Posted by Surprises Aplenty at 5:47 AM