This is your brain on words, and on word making

When I read a story for the first time, I think that I have a nearly equal role in making the story.  That is, I have read several stories and recalled them later as light-hearted adventure romps only to reread them and find a much darker tone than I remembered.  I don't usually stop to work out the shape of the room or the location of characters while I read but somehow I am adding my own details and definitely removing some as well.

Scientific American has looked at how our brains handle the symbols of words as we read.
There writing is a fairly dry description of the research but anyone who communicates with the spoken word will find it interesting. A single paragraph:


Sound may have been the original vehicle for language, but writing allows us to create and understand words without it. Yet new research shows that sound remains a critical element of reading.

---
And now, when we write our brains are like those of NBA players performing their skills. The New York Times has some kind of anti-copy-n-paste arrangement so let me offer a fragment of a screenshot: 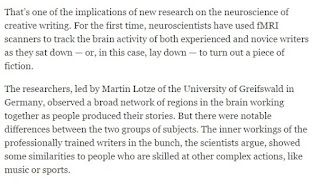 Both of these experiments relied on MRIs and in the latter article, the excellent Carl Zimmer points out some of the challenges.  The people in the MRIs had to keep their heads still so they wrote on a notepad that they viewed through mirrors.  I'm sure the researchers knew what they were doing but it sure sounds like an artificial environment. 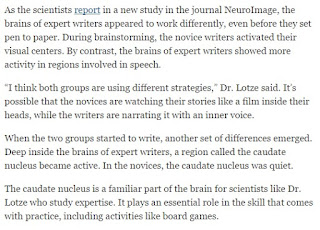 ---
All this talk about brains has led me to thinking about.... zombies!  A Kickstarter campaign is underway for a book of feminist bicycle zombie fiction.

I've long believed that one idea is not enough for a story or well anything.  You need two or more and work on how they interact to create novelty.  Pride and Prejudice and Zombies is an excellent example. Salt mixed with chocolate and caramel is another.  A restaurant near my apartment opened some time ago offering 'bizarre taste of Korea' with the traditional spicy and garlicky Deokpoki mixed with ice cream.  It was good by gimmicky, by the way; I was done after three spoonfuls.

In your (my) next writing project perhaps you should look at the Genres of Netflix tumblr.

Huffington Post offers 9 eerily specific Netflix genres.  #4 is 'Violent Nightmare Vacation Movies"
---
For less polished writers, A quick guide to avoiding common writing errors.  It doesn't offer the continuous tense of 'lie' as in 'not tell the truth'.  Lieing?  Lyeing? Lying?  The final one looks right but I'm not using lye.
Posted by Surprises Aplenty at 8:35 AM