At least one author happy with Amazon's money per page program

Years ago, David Simpson asked me to read his book Post-Human and post a review on GoodReads.  I did.  I thought the book was good but there are many who thought/think it is great.  Simpson is thrilled with Amazon's pay-per-page program. 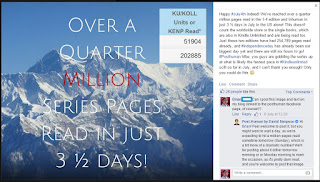 His books on Amazon.
His GoodReads page.
His book's Facebook site.
His personal page. 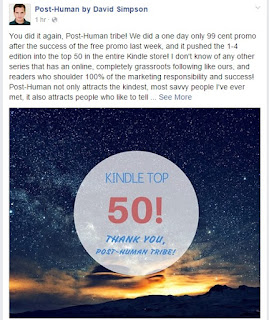 UPDATED July 14 (well, July 15 but with news from the fourteenth):


It took just 12 days for the Post-Human series to get over a MILLION page reads on Kindle Unlimited in the US! Wow! That...
Posted by Post-Human by David Simpson on Monday, 13 July 2015 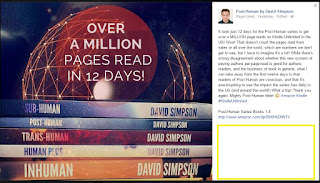 -----
Original Post:
I will update this post when his book hits a million pages read in July.  That should happen today or tomorrow (Sunday or Monday).

In this recent blogpost, I discussed how I didn't like Amazon's PPP program.  Mostly, my concerns came down to privacy issues (which are unaffected by Simpsons success) and by fears over a new hoop to jump through for the author to get paid.  The latter fear is a result of pessimism or lack of self-confidence and I am impressed with Simpson's strength in these areas.


What we readers have been lacking all this time are books with the fun-filled, life-affirming qualities of the crack-pipe: fiction filled with endless hooks and twists that drive a boundless craving for more. Meanwhile, the stuff that you have to work at, put down, plan to get back to later but never do – that stuff like Ulysses, Moby Dick and The Golden Bowl – that’s out.
Now, if only we could apply the same model to music. I mean, I know that no one has to buy whole albums any more, but we do still have to buy entire tracks. Outrageous. Beethoven’s Fifth Symphony, for example. I like the Dah-dah-dah-DAAAH bit at the beginning. But you have to admit it flounders a bit after that. So next time it’s on at the Festival Hall, I’d like a ticket. But only for the first minute please. Shall we say 35p?

The Guardian and Atlantic agree that it will change the way books are written: From the Guardian:


Self-published authors can opt in via Amazon’s KDP Select programme, which gives them a cut from a fund calculated by Amazon on a monthly basis: for June 2015, it’s $3m (£1.9m). This naturally puts a cap on author’s earnings, as they can never earn more than the fund allows and are competing for a share with all the other authors on the programme.

Amazon used to start paying royalties on the borrowed book once a reader got to 10% of the way through, but this was proving unfair to authors who wrote longer books. A reader perusing a short book reaches the trigger point for payment much faster than one reading an 800-page tome. The result was a flood of very short reads as authors spread their writing over as many books as possible.

Ah, I hadn't realized it only affected borrowed books rather than purchased ones.  The Guardian's post is a great explainer; read the rest of it.

From Peter Wayner at the Atlantic:


The sweet spot in this formula, then, must be books full of cliffhangers that keep people flipping the pages. The answer is now to pack a book with ticking time-bombs, unexplained plans, and lots of secrets to be revealed later. What did she whisper? Hold on, let's jump to a different thread halfway around the globe! (Of course, there’s a fine line between books with needless suspense and books that are simply engaging—the latter will probably sell well in any marketplace.)
As I worked hard to make my short books shorter, I may have shattered the effect that some readers crave, the chance to lose themselves in another world. One of my former editors read one of my short books and told me that he didn't have time to relax. "Instead of a leisurely stroll through a book I felt like I was on a bit of a forced march," he said. The staccato recitation of facts wasn't a nice way to spend a lazy afternoon.


I wonder if we will return to Dickensian pay per word and serializations of books.
Posted by Surprises Aplenty at 10:13 PM