Are women perceived as less creative? 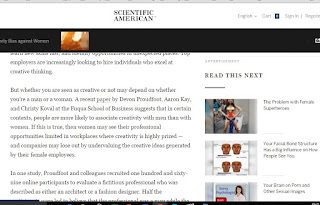 Before getting into the article, let me say here that the double tab bar on the Sci Am website makes reading there a chore.  I copied the pasted the article into a Wordpad document to be able to read it comfortably.  As seen above, there is a 'Scientific American' bar in White and a 'Now reading' bar in black.  They took up valuable real estate on my notebook's screen.

An article at Scientific American suggests that the answer is yes.
Daisy Grewal looked at a variety of studies and found that when the gender of an architect was known, the perceived creativity of their work declined.


In this and other studies, the definition of creativity was discussed:


The data that the researchers were most interested in was the percentage of viewers that applied the adjective “ingenious” to a talk, since it was the adjective most closely aligned with creativity.

...
...found that people’s general beliefs about what it takes to “think creatively” show substantial overlap with traits we more closely associate with men, such as competitiveness, self-reliance, and risk-taking.


Proudfoot and colleagues found one-hundred and thirty-four senior-level executives enrolled in an MBA program. As part of the curriculum, each executive was anonymously evaluated by their supervisors and direct reports on several dimensions, including perceived innovativeness. Looking at the evaluations in terms of gender revealed that the female executives were judged by their supervisors as less innovative in their thinking compared to the male executives

Posted by Surprises Aplenty at 10:49 PM