Nanowrimo is finished. Am I?

Today's total: 553 words
This is the third time I have completed Nanowrimo and the first time I was a Municipal Liaison.  I am tired of it.

The writing wasn't bad or difficult.  There were a few days where I really had to think about what to write next but mostly it spilled out with satisfying smoothness.  The 'Word-wars' and 'Word-sprints' were the toughest part.  A war or sprint occurs when a group decides to do nothing but write for the next twenty minutes (typically 20, it could be any length).  After that time, we compare word counts.  My best was 511 words in twenty minutes and others managed as high as 900 words.

This was a great way to encourage focused typing, but after each sprint or war, people would chat for ten minutes - or get coffee or do other things -and as ML, I was expected to be sociable.  And I enjoyed being sociable.  On the other hand, this meant that twenty minutes of every hour was lost to typing.  You have to type an awful in forty minutes to make up a good hour's word count in that time.

Nanowrimo is an attempt to make the solitary act of typing a social event and it succeeds.  I don't write nearly as much as I want to in the other eleven months so for me it is hugely useful and valuable.  Still, it was the unrelenting social aspect that wore me down this time. 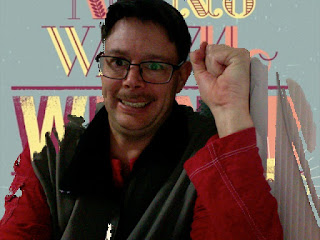 I had trouble with my iMac's photo-booth application.  The green screen effect wasn't as good as it should have been. 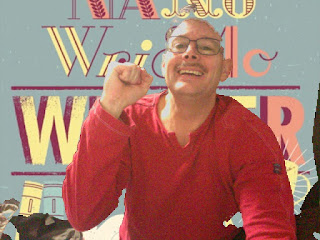 I was really swept into the literary circles of Busan and there are more writers and wannabes like myself here than I had realized.  This was encouraging and in seeing how they manage to write for more than one twelfth of the year, I see that I need to not stop.

I will not try to maintain the seventeen hundred words a day pace of Nano but will try to stay above 500 a day.
This count does not include anything except my story.  The words of this post are not included.

In Korea, there is a strange Konglish word, "Fighting" which means keep going, or good luck.  Among my Nano friends, we said, "Writing."
Posted by Surprises Aplenty at 6:18 AM