This is the 200th anniversary of Frankenstein by Mary Shelley. Chabot, Creative Non-fiction Magazine and NaNoWriMo present a pair of contests in the classic book's honour. The deadline for a fiction entry is July 31, while the deadline for a non-fiction entry is March 20, 2017.
---
My writing can be clunky sometimes.  Maybe this is a warning to me that the ridiculous errors, even of simple word choice, can knock a person out of a stream-of-reading into simply looking at a group of words. This sentence removed me from enjoying the content and put me in the position of critiquing it.

"People of all ages in the study did some art for 45 minutes."
Did some art.

The rest of the article isn't much better, or perhaps the publishing of contradictory results, which should be applauded, isn't as exciting as uniformly positive or negative results.
----
I am a big fan of Wondermark. I am not entirely sure Malki's comic fits the content of this blog, but it does fit my need to organize and motivate myself to do creative work. Excerpted and shrunk, as usual.  To see the full, and full size, comic, follow the link. 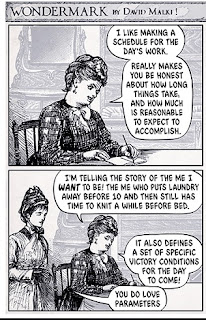 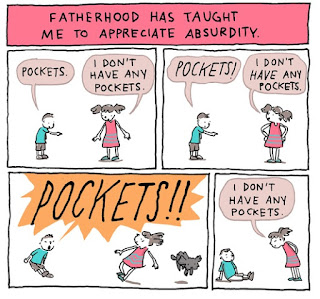 ---
Man, I hope this post is making as much sense as it ever does.  I had a Mecklenburger with supper and my head is spinning a little.  Good stuff. 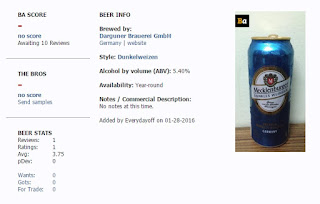 ---
Dan Piraro uses the same excuse or opinion of math that my ilk use to describe artistic ability. Image is shrunk; see full size one - and many more- at the link. 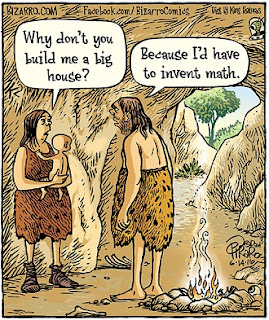 I have a love/hate relationship with math. I hated it in school because I was never particularly good at it––except for Geometry, which I could visualize––but I’m fascinated by the majesty and magic of it. I saw a NOVA episode recently called “The Great Math Mystery” and it blew my mind. I often wish I could get really deep into high-level math but I think it’s a genetic skill like being a good artist. My brain just won’t do math beyond what the average 12-year-old learns. Attempts to force it to have resulted in tears.

Ferrelas replied in the comments:


Regarding your comment about being a great artist/math being a genetic ability, I think you are wrong. I think the reason that most peole aren’t more productive in those respective fields is that they’ve simply convinced themselves that they can’t do it. The human brain is a highly configurable peice of hardware with an innate ability for both visual and numerical processing, it would be crazy to assume that the average person couldn’t become at least reasonably adept in either field.
With math, I think the problem lies a lot with how we teach it, it’s jsut too boring and abstract for anyone to get a good amount of training in it, without being insane, like me.
With art, I think it’s the notion that it takes talent to become good at it.


I’m not sure about math but I know that a person cannot be taught to be a great artist without a great amount of natural ability. You can practice and fine tune what you have but you cannot teach superior skills. As with superior athletes, the vast majority is a natural gift.

I trust Dan Piraro, but I just find his claim contradicts so much of what I have been told. This blog is about learning to be creative, not necessarily about being an artist.  Still, what has kept me going in my study and exploration is the idea that I could learn this stuff.  Piraro says I have to be born with the ability.  Man, I wish I hadn't had that beer before typing this.
For my own peace of mind, I think he is saying that hand-eye coordination and the ability to visualize things are somewhat or largely innate.  People without these advantages can still learn to make art but they may need to go the route of Dinosaur Comics which has used the same image but different text for years.
---
Wil Wheaton is having trouble motivating himself to get to work. On the plus side, he found a trove of jazz on the Internet Archive. I don't know anything about jazz but maybe there is interesting stuff here. Anyway, Wheaton lays out his problem and where he thinks a solution lies:


Oh, I had this realization: I’m creatively starving. So I know what the source of my anxiety is, and I know why I feel unhappy and frustrated. Now I just have to figure out what the thing to do is. Part of that incessant background hum is knowing that I can do almost anything, if I just do the fucking work, so I don’t know where to start.
But I have an idea … of sorts. So that’s a start.