Perhaps my opinion of my work is not indicative of whether it will be successful.  Well, that's the case for these authors and artists.


One of the most acclaimed episodes of the original [Star Trek] series is "The City On The Edge Of Forever," which is about the Enterprise crew stumbling upon a gateway to the past, where they encounter a woman whom Kirk falls in love with, only to discover that she's destined to die, and that preventing her death would somehow cause the Nazis to take over the world. Basically, it's Ashton Kutcher's The Butterfly Effect, only replacing one self-important egomaniacal douchebag with another. The episode won the Writers Guild Award for sci-fi legend Harlan Ellison, who hated it so much that he wrote a goddamn book about how many pounds of shit he'd like to lay upon it.

---
What does a beta reader do? Excerpts from four points on the list are below - the list at the link has eight points:


1. Ask for ground rules at the beginning. I’ve had authors ask me to “beta read” and what they really wanted was for me to proofread their already pre-edited version of their work in progress. On the other end of the spectrum, I’ve had another author give me a questionnaire to fill out.
2. This is not just a free book for you! Yes, you get to read the book, and you aren’t paying for it, but the author is looking for assistance with their book, in whatever capacity they need.

3. Be honest. You are not helping the author by only giving them all the things you loved about it. If you don’t like something, tell them.
4. Give it the appropriate amount of time. I can read a book, with all my other things (day job, 2nd job, blog, etc) in about two days. With a beta read, I like to have at least a week.

Malki at Wondermark shares his discussion of the value of beta readers. The full comic is at the link; here is an excerpt: 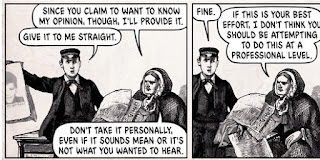 ---
On a swimming blog, I found the best advice, not just for swimmers, but everyone:


Be the hardest worker and the one having the most fun

---
Readers buy books made of paper but typically license ebooks.  Publishers pay different royalties to authors when their books are bought or licensed. Well, they're supposed to.  Apparently licensing royalties are higher than sales royalties and now some authors are suing publishers for the difference they feel they are owed.


When you sign a publishing deal, the contract spells out different royalty rates for different kinds of commercial activity; you get so much every time a copy is sold, and significantly more from every licensing deal for the book.
When you buy an ebook, it, too, comes with a contract, a long, boring EULA, that inevitably says, "You have not bought this book" (because otherwise you'd have the right to sell it or give it away), and "You have merely licensed this book," meaning that you have to abide by the terms set out on the accompanying "license agreement."


In 2012, Eminem and Universal settled a lawsuit over this very issue, with Universal agreeing to pay Eminem the licensing rate on the digital music sales it made to customers who also got a "license agreement" with their purchase.

---
Custom make or colour maps at mapchart.  Via Boingboing, which has an example.
---
Street photography tips.


#8 Take a break and post a shot or two on instagram so you don't bleed the feed later.

No idea what that means but the other tips seemed valuable.
---
I've linked to archives before so here is one of Hiphop mixed tapes. Well, mixed artist collections, I guess. The previous links to images hosted by museums were pretty wide open so far as terms of use were concerned. I am not sure if these files should only be listened to or if they can be used as background or harvested for samples.
Posted by Surprises Aplenty at 4:47 AM