Ted Krulik interviewed Roger Zelazny, one of my favorite authors, several times over the course of a week.  He has put some excerpts and discussion from those interviews up on Tor. Here is one where they talk about writing.


I asked him: Which is easier to write, fantasy or science fiction? He sat comfortably back in his easy chair in the lower level of his home and gave the following answer:

I find fantasy easier to write. If I’m going to write science fiction, I spend a lot more time thinking up justifications. I can write fantasy without thinking as much. I like to balance things out: a certain amount of fantasy and a certain amount of science fiction.
In a sense, fantasy is a freer play of the imagination. You can achieve exactly the situation you want with less groundwork, less of a need to fill-in all of the background.
For science fiction, I would use a lot of sources to set up, for instance, what a being from another planet would be like.
I suppose if I wanted to create an alien being in fantasy, the creature could be a golem created by, say, four sorcerers. I wouldn’t have to go into a long explanation as to the nature of the creature.


I asked Roger what a typical writing day was for him. This is what he told me:

When I’m beginning work on a book, I’m happy to write something every day. It doesn’t matter how much. At the half-way point, I’m usually turning out about 1500 words a day. I tend to write a little more slowly, but the copy I produce doesn’t require much work once it’s finished.
When things do begin to go very well with a book and I’m getting near the end, I’ll write in the evenings and at any odd moment during the day. I move faster as I get nearer the end, so that I produce large amounts of copy in a day’s time. I may turn out three or four thousand words a day. There’s a point where it just begins to flow, usually in the latter stages of the book.


I had been working on a project with another science fiction writer in New Mexico, George R. R. Martin. George gave me some papers on the project to look over. Shannon [Roger’s daughter, age six at the time] came over while I was working and asked me what I was looking at. I said, “These are some ideas George has given me.”
Sometime later, a local newspaper reporter asked Shannon if she knew where I got my ideas. She answered, “George R. R. Martin gives them to him.”


So, on the eve of a new book’s release, as that journey from Senj to Senjan [Senj is or was real place in Dalmatia, while the location in his book is named Senjen]  leads to Children of Earth and Sky, it seems proper to address the ‘why’ of such a journey. Why isn’t the book set in a ‘real’ place, in our own Europe? Why do I have Seressa instead of Venice and Batiara for Italy? Why a rebel leader named Skandir, instead of Albania’s great Skanderbeg, who inspired my character?
There are a multiplicity of reasons by now. But here’s a caveat: be skeptical when writers present intuitive processes as thought-out planning. This was an evolution for me, not a strategic concept. I discovered what I was doing, and why it worked for me. I didn’t lay it out in advance.

Follow the link to see what he thinks in hindsight his strategy was.
---
Is PZ Myers planning on writing erotica?
No, but he has read a little of the intricacies of the field. "At least I have the satisfaction of knowing that becoming a biologist through years of training, negotiating a dicey job market, and putting in 10 hour days 6-7 days a week wasn’t actually as stupid a decision as I thought."
Some takeaways from his research:

Johnson says there is indeed such a thing as dinosaur porn—apparently a genre created to evade Amazon’s ban on bestiality, which only applies to living species—but it doesn’t have a lot of readers.Retailers are happy to throw erotica writers under the bus by claiming to have not known what content was being uploaded to their storefronts,” Skyes said. “I never know if the next insane email I wake up to is going to be the one that means yesterday was my last day of writing for a living.” 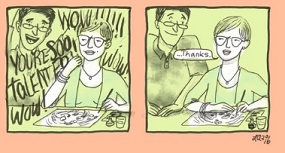 This image has been shrunk and cropped.  Ironically this is the punchline and the set up is the relevant part.


"I have made it a hobby to investigate the stories of such prodigies," Ericsson writes, "and I can report with confidence that I have never found a convincing case for anyone developing extraordinary abilities without intense, extended practice."
Because the word "practice" is a big tent capable of hiding habits both good and bad, I spoke with Ericsson, who is on the faculty at Florida State University, about what he considers the path to mastering a craft, whether playing tennis or trombone. He calls it "deliberate practice."
The most optimal way to improve your performance is to find a teacher who has been teaching other people to reach the level of performance that you want to attain. This basically means that teacher will be able to tell you the most effective ways to improve. A good teacher will also be able to find suitable units of improvement, so you don't push yourself more than you can do.
Just start out, 15 or 20 minutes [a day]. Especially if you have a mentor and, ideally, a teacher.

Byron was such a tool ppl invented vampire fiction to take the piss out of him, sf not to hang out w him&programming not be be like him
— Erin Horáková (@ehorakova) June 7, 2016

The book I am writing involves the British in Italy in 1830, not long after Lord Byron was there. Many events take place in Venice. I have been wondering if I should include or name drop him in the story.
Wikipedia on Byron.
Open Letters Monthly on Byron.
Archive dot org
Timeless Italy on Byron and swimming. How can I not link?
English History.
Posted by Surprises Aplenty at 7:30 AM