I just completed Nanowrimo. I didn't finish anything but this time I think I will. There are so many steps between a first draft and a book listed on Amazon and I don't know most of them. But one step I do know, and am finding challenging, is naming my work.

The story I wrote had the theme of fighting against the greed of all empires. I don't know if that sounds pretentious and the story as written only has that in the background, but it is there. I swear it is. Use a magnifying glass if you need to.

So the working title, one that I don't like, was "Smash the Lion, Smash the Bear, Smash the Dragon" with England, Russia and China figuring in the story.  Later, for some reason being reminded of Edward Abbey, I decided The Steamwrench Gang might better fit.  But I don't know. 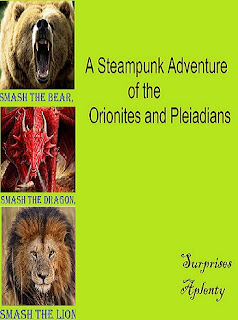 Note: I am definitely not using this as a book cover!
I have a tiny bit better design sense than that!

Enter The Book Title Generator! It uses the standard lists of words that you choose depending on your initials or the name of the town you were born in, etc. I tried a few variations and the grammar worked consistently, which impressed me. According to the generator, my Christmas book should be titled:
If Garlands Always Dance

While my Crime/Thriller book should be:
The Hidden Wall

My work of Literary Fiction:
The indefatigable Endgame in Bracebridge

My Autobiography:
Brian: My Brave Gamble

Hmmm. No steampunk or Sci fi. UK Rifter has my back with a Sci-fi title generator. It is more random and you simply press a button. It offered me:

They don't fit my book, but I like them. Maybe I should work on a book to fit the title.

Turns out a Google search turns up a lot of title generators. From Lisapaitzspindler:
Faith Dogsbody and the Airship Goggles

Mcoorlim's site more obviously picks words from a list and so offers five options in case a few don't make any sense.

The Nano website has an appellation station forum page where people can ask for help naming things. Perhaps I need to visit it more.
There were so many names in my stories. That's not right; there were so many people of different nationalities that needed names in my story. I needed various Chinese, Turkish, Nepalese, Italian, Swiss, Kazakh and Russian names.  There are probably a few InsertName Laters in my story as well.

And all this is before I decide if I want the names to mean anything. The only name that carries special meaning is that of Lord "Oldwife", a man who led a British expedition into Tibet.

This might take a while.
Posted by Surprises Aplenty at 12:17 AM