Short story contests of 2017. An excerpt:

David Nathan Meyerson Prize for Fictionis only open to writers who have not yet published a book of fiction, either a novel or collection of stories. The winner receives US$1000 and publication in Southwest Review. Stories can be up to 8000 words in length and all entries will be considered for publication. The deadline for entries is 1 May.
Conium Review Innovative Short Fiction Contestis for new writing that takes risks and shows something new with its subject, style or characters. Submission may include any combination of flash fiction or short stories up to 7500 total words.The winner receives US$500 and publication. Entries are expected to open in February and close on 1 May.
Ploughshares Emerging Writer’s Contestis open to writers of fiction, nonfiction, and poetry who have yet to publish a book. The winner in each genre will be awarded US$2000. Entries open on 1 March and close 15 May.

---
A Case Study of Self Treatment of writers block. 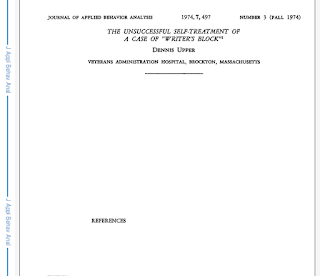 Unsuccessful.
As humourous as the article is, it was cited in another paper.
Phylogenetic analysis of methionine synthesis genes from Thalassiosira pseudonana My bolding below.


The Cbf1 (centromere-binding factor 1) is a basic helix-loop-helix protein, which forms homodimers to bind to sites with consensus CACGTG core present at MET gene promoters (Kuras et al. 1996). This makes it to one of main activators of methionine metabolism and glutathione synthesis genes in yeast. Very little is known about the transcriptional regulation of gene expression in diatoms (Upper 1974). In genomes of T. pseudonana and P. tricornutum as much as 46 and 40 zinc finger transcription factors were identified, respectively. These belong to three types: C2H2, CCCH and TAZ type (Rayko et al. 2010). Neither, Met4p nor Met31p/Met32p yeast orthologs were found in the genome of T. pseudonana.

I imagine that the regulation of gene expression involves blocking the writing of its code. Hence, writer's block.
---
4 online resources to practice drawing figures.

Posted by Surprises Aplenty at 2:18 AM