My internet friend Gord Sellar, who I have often described as a real writer, unlike myself, has the title story for Analog magazine!
---
Dalibor Popović Mikša  describes his work with watercolours at Doodlewash. Miksa is Serbian and when I read this:


The light is probably the main theme of all my works. Considering that I prefer to paint in studio using photographs, instead of plein air painting, I developed the ability to recognize the right photography with expressed contrast of light and shadow.

I figured 'plein' was a spelling error and some sort of mis-translation of some Serbian word meaning 'open'.  I'm sure glad I googled that word and my apologies to Miksa. Plein Air Painting


...the creation of transportable paint tubes and the box easel—the precursor to the plein air easels of today—allowed artists the freedom to paint “en plein air,” which is the French expression for “in the open air.”

The article is interesting and I enjoyed his(?) work. Here is one such (as always, shrank significantly. To see full size, follow the link): 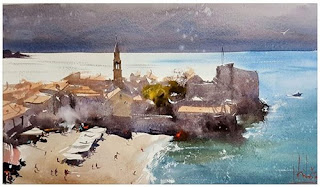 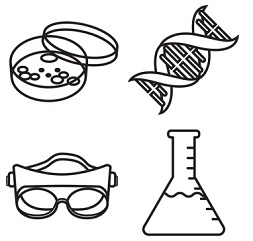 Tips for making stop motion clay or (I think) Lego videos. I haven't seen much of them yet but I think my son and I will enjoy them. More at: Guldies.
---
I used to study maps for hours. As a wannabe writer, I often pour over maps thinking about where my characters are going. Here is a more accurate map.
---
Sci Fi can help us survive Donald Trump.


Science fiction came into being in response to a new thing in human history: the understanding that not only was the world changing, but also that the rate of change was speeding up. That in a normal lifetime, you could expect to experience multiple episodes of rapid, disorienting change. Science fiction at its best has always been about examining and inhabiting those experiences when the world passes through a one-way door.


The more important matters for me, since the election, are those that offer reminders of human potential, rather than spotlighting the human propensity for stupidity. Engagement with art is not disengagement from politics, but the demolition of cynicism. Art that gives hope is the most powerful weapon against apathy, as cynicism only produces paralysis.

---
Differences in patent data. At the Sci Am webpage you will find a whopping 1.2 mb image showing differences incollaboration. Here is a snip. 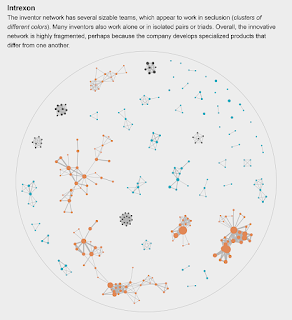 ---
I'm a sucker for Periodic Tables. Here is a version describing elements of instructional design. 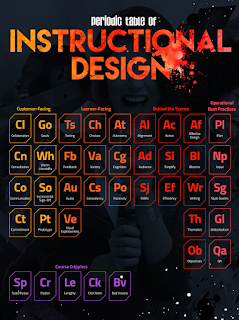 Follow the link for the full set of explanations. Here are a few of them. 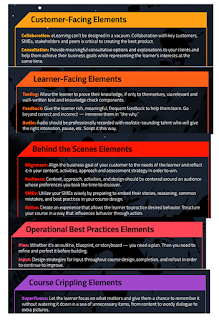 .
Posted by Surprises Aplenty at 6:56 PM