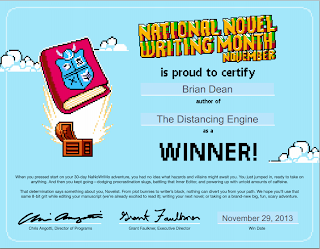 The story isn't done, but I have managed this milestone.  Woo-hoo!  I unironically feel very proud.

I know there is a lot of criticism of NaNoWriMo and I understand why.  I have not, in fact, written a novel, but only around 3/4 of a first draft of a novel.  Some of my motivation for writing is now gone and if I needed it to get started, will I need similar motivation to actually finish the darn thing*?  Why would anyone want to read my made-up-as-I-went-along story anyway?


Well, they might want to.  I do know that my story, as a commercial product, is not even half done.  As long as I, and other NaNoWriMo authors keep this in mind, there is real value in the event.


And I have really improved.  My story started as half-assed but is now at least 4/5-assed.  The characters have filled out and possess individual motivations  Friends sometimes have conflicts and enemies sometimes agree.  I am not saying I have written a profound story, but it is deeper than when I started.

I had forgotten the grammar forms for a few situations and have relearned them. I have learned some of my weaknesses and strengthened them.

I am a better writer and it is because of NaNoWriMo.

I hadn't planned to donate to them but I now think I will.
-
*As a sorta-writer and a sorta-carver, one thing I have learned is that no one ever finishes a creative piece.  The best one can do is decide at some point to stop editing. This story needs a lot of work before even the first draft can be considered done.  I have to end the story (and most of these arguments also apply to choosing where to end) and run it through spell-check, then check continuity and such before daring to show it to someone for commentary.
Posted by Surprises Aplenty at 11:43 AM