A Google Search reveals many with strong opinions of NaNoWriMo.  I touched on this at the beginning of the month but wanted to dig in now that I have completed the ordeal.

Against: 1) First, the worst thing that happened to me during the month is the gain of 5 pounds.

Against 2: Laura Miller, at Slate, has an odd view of reading and writing:


Here’s why: NaNoWriMo is an event geared entirely toward writers, which means it’s largely unnecessary. When I recently stumbled across a list of promotional ideas for bookstores seeking to jump on the bandwagon, true dismay set in. “Write Your Novel Here” was the suggested motto for an in-store NaNoWriMo event. It was yet another depressing sign that the cultural spaces once dedicated to the selfless art of reading are being taken over by the narcissistic commerce of writing.
I say “commerce” because far more money can be made out of people who want to write novels than out of people who want to read them. And an astonishing number of individuals who want to do the former will confess to never doing the latter. “People would come up to me at parties,” author Ann Bauer recently told me, “and say, ‘I’ve been thinking of writing a book. Tell me what you think of this …’ And I’d (eventually) divert the conversation by asking what they read … Now, the ‘What do you read?’ question is inevitably answered, ‘Oh, I don’t have time to read. I’m just concentrating on my writing.’”
In an essay for the Atlantic earlier this year, the fine short story writer Richard Bausch describes meeting a couple who edited a struggling literary magazine and funded it by publishing a never-ending stream of how-to manuals for would-be writers. The wife offered him $10,000 on the spot to write one himself. “These kinds of books sell better than the fiction books,” she explained.
Frankly, there are already more than enough novels out there — more than those of us who still read novels could ever get around to poking our noses into, even when it’s our job to do so.

I think she has it backwards; most NaNoWriMo authors make the attempt because they love reading.  There are predatory commercial interests involved but that is also true in the fields of fitness and diet and these subjects are not so rendered unimportant.  A bookstore that invites writers or even wannabe writers is probably going after an excellent target market.

And the idea 'there are enough novels out there' is both trivially true and a diagnostic sign for a closed mind.  There are enough movies, TV shows, books, paintings, woodcarvings, dance forms, out there, so let's stop all artistic endeavor.

This part of Miller's article did make me want more details:


Consider turning away from the self-aggrandizing frenzy of NaNoWriMo and embracing the quieter triumph of Kalen Landow and Melissa Klug’s “10/10/10″ challenge: These two women read 10 books in 10 categories between Jan. 1 and Oct. 10, focusing on genres outside their habitual favorites.

I as a reader and (wannabe) writer set a goal last year of 50 books in 2012.  I beat it handily, reading around 70 books.  I'm impressed and suspicious of someone reading a hundred books in significantly less than a year.  That's a book every three days.

I wonder how much crap they read because they had to to make their quota.  Hey, change 'read' to 'wrote' and that sound like a line Miller used to impugn NaNoWriMo.  Landow and Klug may have read nothing but interesting and valuable books but most in that marathon would not.

Against 3) Here is a reason not to do NaNoWriMo.  Look at this page from my commonplace book. 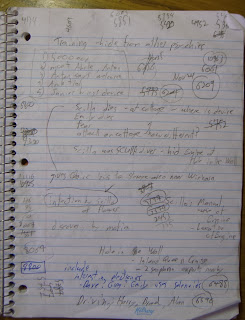 Those numbers, written everywhere, have nothing to do with the plot but are there to help me count how many words I typed on a given day.  I would tend to update my count every two hundred words or so.  If I was really into the writing, perhaps eight hundred would go by before I updated.  I did not deliberately write valueless exposition or description of backgrounds.  Indeed, when I revise, I expect to need to add a great deal of description to others can see the movie that seems so clear in my head.  Still, when I couldn't think of how to go forward, I went sideways. There were eight characters and, when stuck, I would go into what several were thinking or doing until I saw how to move forward.  This might look perfect as a tension building device but i doubt it.

For 1) Antony Johnston feels writing more means improving more (I've added several ellipses.  Follow the link if you want the whole thing - I want his point to be clear but his details to be on his page only.  Go have a look):


WRITING MORE MAKES YOU A BETTER WRITER....
Look: anyone can sit down and write two pages of a novel, then forget about it, and a week later write five pages of a screenplay, then forget about it, and a week later start another novel… etc, etc.
That shit is easy. Everyone (yes, even working writers) has a ton of projects they’ve started but never finished.
But writing a whole novel? Or a whole screenplay, or comic book, or stage play, or whatever? Actually seeing it through and finishing it?
Well, now. That shit is hard.
You learn from it. You learn how to sit your arse down and write, even when you don’t feel “inspired”. Even when ... this room could really do with a good dusting couldn’t it, and, and, and you write anyway.
You improve. It’s impossible not to, because you have something finished, to review and assess in its entirety. And when it’s finished, it inevitably comes up wanting. What you write is never as good as what you had in your head when you started — never, ever, ever — so you make a promise to yourself, to do it better next time.
You can’t do that if you still haven’t finished this time.


Against 4) Albert Riehle repeats the complaint that no one feels we should all try Brain Surgery so why do we all want to try writing?  To repeat my rebuttal: Almost everyone can walk and run so trying a marathon or 10 km is reasonable in ways that trying a 10 km swim is not.  Almost everyone reads and writes daily so the step up is not at all similar as attempting complicated medical procedures.  Albert Riehle needs to learn about false equivalence.  He clearly isn't perfect at logic so he should forever give up on persuasive writing.

Riehle also mentions the commercial aspect of NaNoWriMo.  On the website are ads for writing software and professional editing services. This might be a fair criticism.  On the other hand, I usedOmmWriter, a free word processor and found it entirely satisfactory.  The 'Build a book' outline and organization guide I saw on the website was free. I am likely to donate money but only came to that decision after finishing the event.

For 2) JunkFoodMonkey likes the idea of NaNoWriMo as a way to promote creative pursuits:


Okay, so why is it NaNoWriMo, rather than PaintAPictureADayMonth or LearnToPlayAnInstrumentMonth? Those are legitimate creative pursuits. Why is it NaNoWriMo that caught on?
Because writing is easy! In the purely practical sense that is. Almost everyone knows how to do it. You don't need special equipment, at least nothing that you probably don't already own, so there's little or no financial outlay. You don't need lessons or a how to book before you can even start. You can do it almost anywhere.

For 3) DebraEve learned to just write:


3. Distract that troll.  Devise ruthless tactics to contain your inner critic. In fact, give it a name. (I got this from Fi Bowman.) My inner critic is Citirc (pronounced Sit-Irk) the Troll. Not very original, but it sums him up and sounds vaguely Anglo-Saxon.
To keep Citirc quiet during Nano, I left an asterisk where an idea needed research or a hash mark where the plot needed work. Then I vaulted over that area and kept writing, promising I’d come back later.
In short, Nanowrimo taught me how to write – not edit, not rewrite, not research. Before Nano, I’d tried to do all those things while creating a first draft. That’s like hanging a gorgeous pair of silk curtains before you’ve installed window frames. It can be done, but what’s the point?


There is more on both sides and note that I loved my NaNoWriMo work even though in this post I twice wrote against it.
---
Not really related:  Congrats to my two closest fellow participants.  Perhaps someday I will meet them.

Posted by Surprises Aplenty at 12:55 PM