Today's goals (written 11:00am):
One hour of woodcarving - this might be a challenge because, at home, I carve in the garage which is not heated.
2100 words for InNoWriMo
----
Five PM, I am now at 2,200 words for the day.  I am concerned that I worked on three points in the story and in two points, I mostly wrote about relationships and the connections my characters have.  In the third, I advanced the plot, but again, not as much as I want.  There are several points coming up were I need more tension, excitement and creativity and I am mostly nibbling around the edges, preparing the field for violence and excitement, but not what that will actually entail.  A group of young psychics, only partially trained but free of ancient preconceptions and biases and beliefs need to defeat a larger group of well-trained but set in their ways psychopathic psychics.  I wonder how they will do that.

A small flash of insight at ten PM:  a main character does a terrible thing and his friends are angry with him but accept his pretty horrible actions quickly - I think they accept them so quickly because it was easier for a lazy writer but now I also think he was partially forgiven because another character has forced them all into strange new tasks and his goals aren't precisely theirs -they're doing strange things and able to spread at least some of the blame to this other character.
I hope that wasn't too cryptic.  Perhaps if and when this story is done, I will explain it better.  This blog is about recording my creative output so I felt I needed a note even if my reader(s?) don't so much.

I didn't do much wood carving today, just enough to retain my feel for it.  I find that when I step away from carving for a few days, the gouges feel strange in my hands and I really have to study the pictures to decide what my next moves will be. When I keep up the habit for a few days running, I can start as soon as the tools and workpiece are in my hands.  Here is a picture of the sculptor at work: 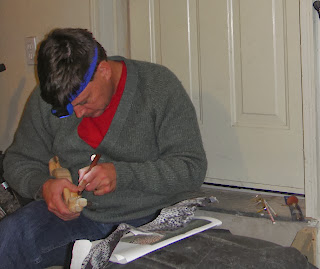 I am sitting on the stairs in the garage.  My eyes are becoming far-sighted so my glasses are beside me.  The lighting is from a bad angle so I am wearing a headlight.  The pictures I use as models are sitting on top of a garbage can lid.  The garage is cold so I am wearing slippers and a cardigan.  I don't know why everyone doesn't want to take up a cool hobby like wood carving.
Posted by Surprises Aplenty at 10:43 PM

Why the garage, may I ask?

Have you forgotten about the prevalence of carpets on this side of the world? The garage is the easiest place to clean up afterwards. The only places not carpeted here - my mother's house - are the bathrooms and the (small) kitchen. I've wondered about putting a tarp on the carpet.