The characters in my InNoWriMo story are coming to life, sometimes in annoying ways.

I'm attempting to be subtle - never my strong suit - and making some balanced characters. Now, my monsters are becoming too human and my heroes are becoming too monstrous.  The bad guys have honour and don't blame the son of a traitor for his betrayal.  Things are gonna change in the editing stage!

My story is topical: I wanted the villains of my story to connected to a mafia so I Googled Mafia, Ontario and learned of the " ‘Ndrangheta". The villains, or the monsters, as described above, are part of a 'ndrina based in Vaughan. Now, I've learned that the ‘Ndrangheta in Italy is trying to kill the Pope. Man, that's cooler than anything happening in my story!


I think you see my mustache in this picture.  Well, the picture's terrible but perhaps you can see a few wisps of hair. 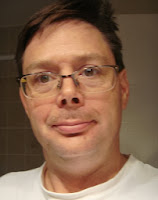 Picked up my gouges today for the first time in too long.  Mostly, I reacquainted myself with the cheetah and scraped a little off here and there.  I found some pictures online of cheetah paws but didn't bring them with me to work on detail.  Next time.

Posted by Surprises Aplenty at 10:56 PM